Our trio of acclimatisation days would come to a close with a much vaunted trip to the ‘Kardung La Pass’ nestled at a staggering 5,359m above sea-level and reputedly the highest road pass in the world, although often times this seems to be open to dispute. However, the day did not go well! 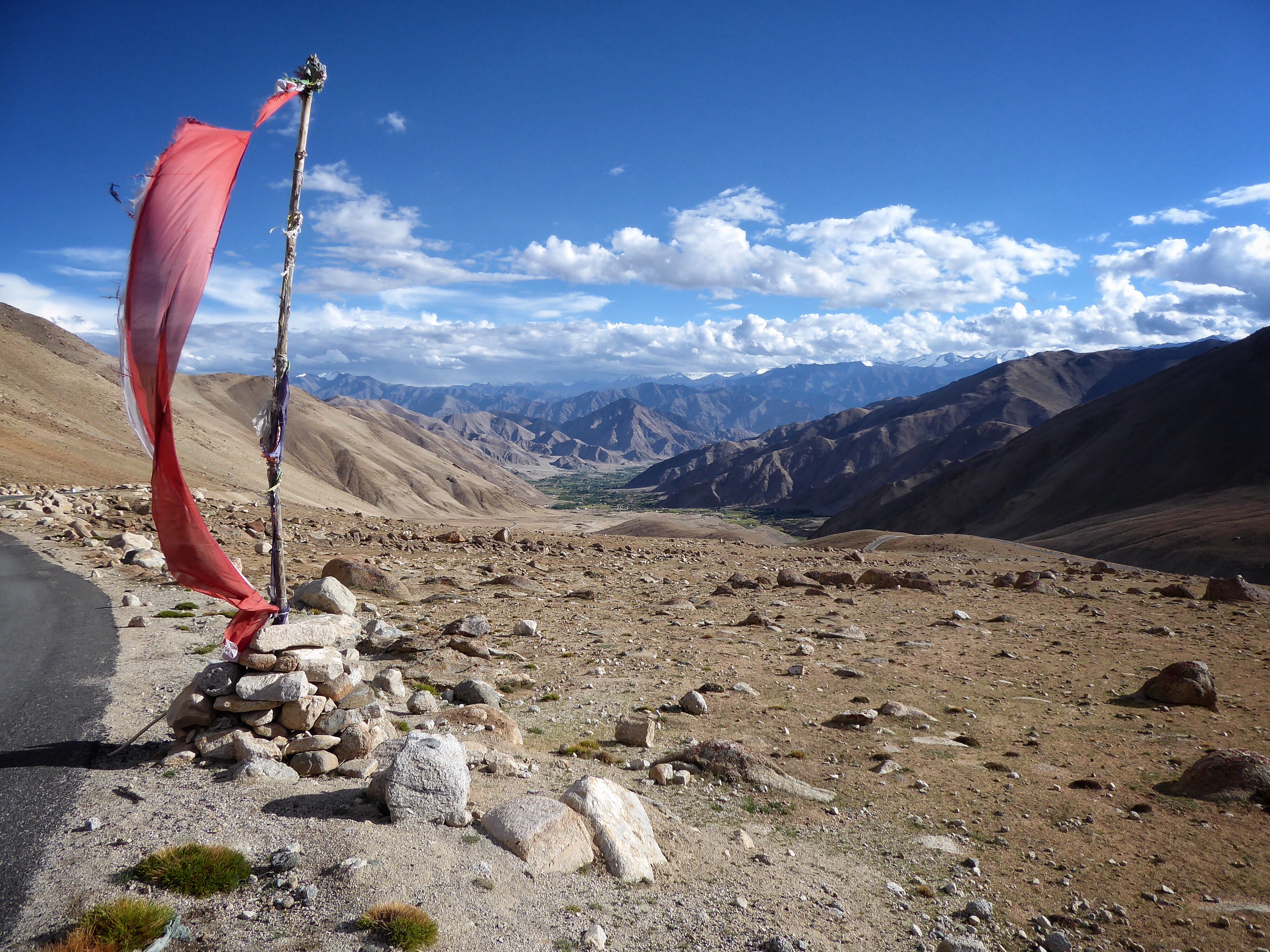 The pass is only about one hours journey out of Leh but it transpired that the week we had chosen to climb one of India most famous peaks was also the same week that Indian Independence was being celebrated and was therefore a national holiday which equaled traffic jams!

Yes, even a third world country it appears suffers from Bank Holiday hold-ups. The pass had been a road block for several days, and we would not be getting there easily. So ‘LT’ our guide had other plans.

He suggested another high pass known as ‘The Wari-La’ from where he claimed we could do an equally good acclimatisation climb from the roadside. So off we set through the arid countryside headed for this new mythical pass.

The main roads in Ladakh are pretty bad, but the minor roads are even worse! Remembering that we were here for an adventure we steeled ourselves for the derrière bashing pseudo off-road journey that was sure to ensue up to the pass.

Thoughts of death or injury on a 6,000m mountain quickly paled into insignificance compared with the constant near death experiences found on a minor road in India. These experiences come in the shape of other cars, hairpin bends with vertical drop offs, burning rubber tyres (courtesy of our driver), and the Indian obsession with wearing flip-flops – even when driving up a mountain.

After several close shaves we finally ground to a halt along a dusty mountain road halfway up the valley where some very official looking men were gesticulating that we needed to turn around.

Apparently the road had been hit by a landslide the night before during the heavy rains and was now impassable. Much arguing and even more gesticulating and a Plan B swung into action as our driver attempted to get up to the blocked pass by using an even smaller road running along the western side of the valley.

Good idea in theory, but after only ten minutes of driving we found that this road had also been hit by a mudslide during the previous nights rains and was also now totally impassable.

We appeared doomed and properly stuck. Plan C was a little more basic. Drive back to the scene of the first landslide and wait it out while the army moved in to clear the way. So it was that we dug in for a good couple of hours wait.

I sat, at first sweltering in the minibus and then after much fidgeting I removed myself and sat on a boulder beside the roadside until I felt myself beginning to burn up under what was now the midday sun. Being a mainly British contingent on the expedition most of the other chaps on the minibus had by now decided to strip off to the waist and roast in the sun beside the road as is our nation’s custom, I quietly declined.

I’m convinced I have a mild case of attention deficit disorder and after ten minutes of doing nothing my fears were reaffirmed as I began to climb up the walls in our sweltering minibus. I needed to make use of this down time. So I began to hatch a plan.

I knew that we were roughly at 3,850m, so I wondered if I attempted to scramble up the rocky slopes beside the road whether or not I could make the magic 4,000m mark and achieve some great acclimatisation from an an otherwise useless situation.

Having convinced myself this was a good idea I started off up the slope hopping from boulder to boulder up and over a dilapidated drystone wall and then up some steep loose scree. I gained height rapidly enough and soon stopped to take a reading from my GPS, it read 4,005m.

As I paused to take in the view along the valley and suck in the rarefied air the lads below realised my plan. Not wanting to miss out on some acclimation they too had decided to trudge up after me figuring out that I must have stopped at around the magical 4,000m mark.

Just then the minibus below sounded its horn. The road had been cleared. Hooray! So we all quickly scree ran back down to the roadside. Finally we drove off towards the Wari-La. A few dozen scary hairpins later, and we arrived just shy of the col at 5,312m.

The air outside the bus was cold, and we layered up. ‘LT’ had dropped us off beneath a boulder strewn slope. An undistinguished rocky knoll somewhere at the top was our target to aim for and so up we all trudged with no obvious path to follow. As we had yet to form any climbing partnerships it became every man and woman for himself or herself. 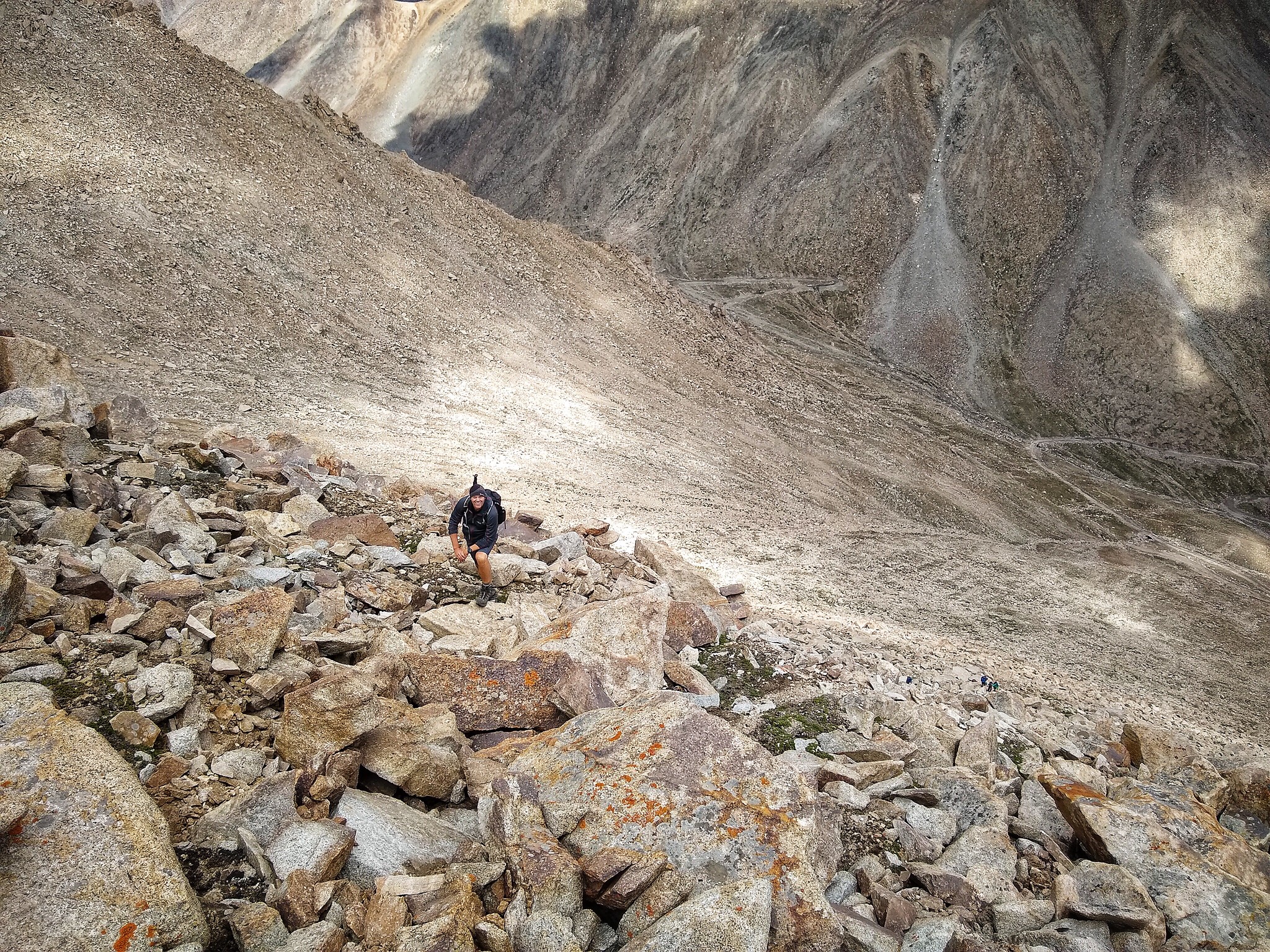 I forged a relatively steep line up the boulders attempting to push myself as far as I was comfortable with, but also mindful not to over exert myself as we were still acclimatising. I topped out on what was universally agreed to be the highest point of this unnamed pile of rubble above the pass.

The climb while very uninspiring on the way up eventually at the top delivered a sublime view over the mountains towards Pakistan and The Karakoram Range. Snowy peaks dotted the vista in all directions. Mission accomplished! As we headed back down my head began to throb and I knew the effects of the high altitude were beginning to kick in.

After an ankle turning descent over the boulders and scree back to the pass we all piled back into the minibus for what was an even scarier drive back down the hairpins than it had been coming up! Smouldering brake discs, screeching turns and the general lack of concern coming from the driver’s seat were all a bit unsettling. But we all agreed we had finally completed an acclimatisation day of note and our combined banging headaches were testament to the punishment we had put ourselves through. 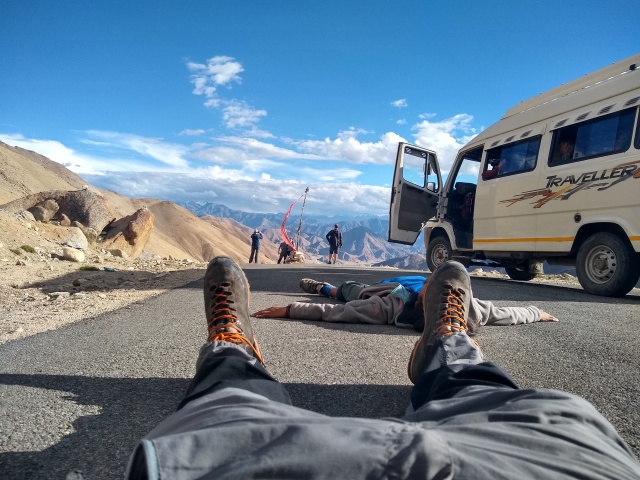 Later that day and back at the hotel in Leh although completely knackered from the days exertions we all needed to embark on packing our travel holdalls because tomorrow we were due to set off up the Indus Valley to finally start the real part of the expedition, the real climb! Stok was getting closer!

Another Prayer Wheel spinning in Kathmandu.
The Essex Way - Stage 6. Coggeshall to Great Horkesley, 11.5 miles further down the line. Next stop Constable Country and The Vale of Dedham.
Sunrise at 6,000m on Mera Peak, Nepal. Moving up the glacier roped together having just passed over a crevasse as dawn breaks above the mountain tops behind.
The West Highland Way Stage 8 Kinlochleven to Fort William. 15 miles and we’ve made it to the finish! 👍🤪
The West Highland Way Stage 7 Kingshouse to Kinlochleven. 9 miles today through epic mountain scenery. Tomorrow all being well we should end our journey in Fort William. Tired feet but happy souls 😀.
The West Highland Way Stage 6 The Bridge of Orchy to Kingshouse. Across Rannoch Moor and on into a moody and brooding Glencoe. True mountain scenery from now on.