Flying into Cambodia I was excited at the prospect of a new phase of this grand Indochina adventure being upon us. I had wanted to visit the Temples of Angkor Wat ever since I had read about them in a ‘Lost Civilisations’ graphical history book way back in the mists of time when I was a gangly and spotty teenager. At the time Indiana Jones was the current smash hit running high at the movies and all things ancient exploration seemed to be in fashion and the flavour of the month.

Caught up in the general momentum as I read the pages in the book I imagined that one day I too would be walking among those ruins in my Indy Fur Fedora Hat and obligatory explorers khaki cargo trousers just like my hero Harrison Ford! Those temples looked so mysterious in their other worldly jungle setting in that book I just had to get there one day as I had so much I wanted to discover and learn. Who were these people that built such amazing monuments and cities, where are they now and what happened to their amazing culture? All questions that I hoped could be answered by finally visiting this place of my childhood imaginings.

So as we flew into Siem Riep known as the gateway to the temples of Angkor I was at the start of a journey to fulfill one of my childhood dreams. As we stepped off the plane we also stepped back around 30 years in a modern time scale, back into an older asia of decades past. Where as Vietnam was embracing the modern and western influences this small corner of South East Asia still clung onto its culture and history unwilling or unable to move with the times. That said the one concession to change appeared to be the swanky modern airport having been been built to accommodate all the thousands of tourists that were beginning to flood into this still backward and somewhat antique but yet totally enthralling country. 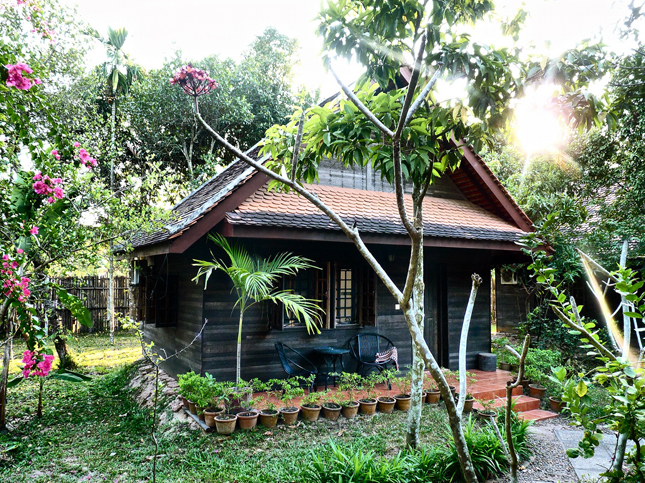 Ourselves we were staying at the unique and rather quirky Palm Village Resort and Spa in Trapaing Ses Village, a part of the Kok Chork Commune which was quite a mouthful to explain to the driver picking us up at the airport. We had chosen this commune because it offered a retreat from the madness of downtown Siem Riep (a known den of iniquity) and a location out of town and also conveniently on the fringes of the temple complexes of Angkor that we had come so far to see. 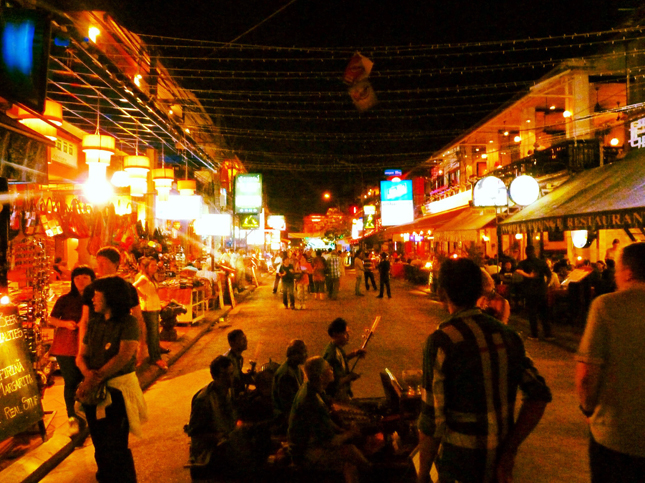 I knew instantly that I would like Cambodia, as with meeting people for the first time were they say you make a decision subconsciously within around 16 seconds of whether or not you like that person so it was with this country, and I knew I liked Cambodia! Gone was the madness of Vietnam, replaced instead with a mellow, happy and a at one with the world kind of feeling here in laid-back Cambodia. Concrete was replaced with bamboo huts, lampposts replaced with trees and mopeds replaced with rickshaws. It was good to be in Cambodia and good to be away from the polluted confines of a modern asian city like Saigon. 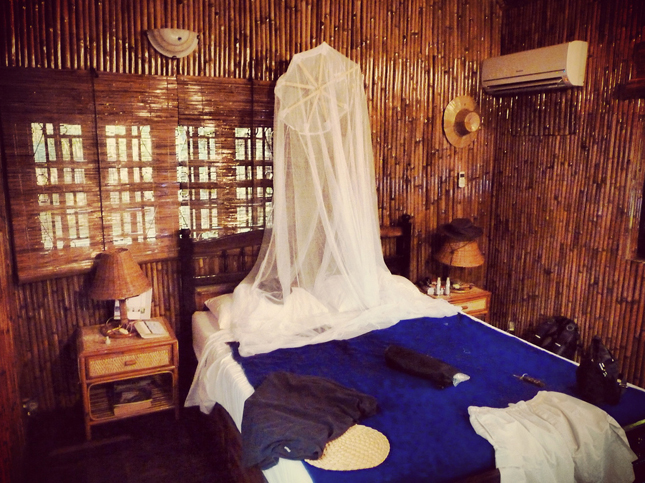 In the commune our shower consisted off a coconut shell to scoop cold water out of a brimming pot in a semi outdoor lean to type bathroom affair. Our beds where under mosquito nets and exotic birds flew among the palm trees, sitting around the small but beautiful pool we felt a million miles away from the hassles of the modern world. For now we were at peace with ourselves and our surroundings!

That evening however it was a case of early to bed & early to rise because tomorrow we were off on an adventure, an adventure to explore the fables temples of Angkor!

In the many books and photos nearly everybody has seen Angkor Wat’s Great Temple but if you thought that that was all there was to Angkor then you would be very very wrong. The place is vast, and I mean vast! Vast beyond comprehension. Angkor is not just a solitary temple by any means, once the capital city of the great Khmer Empire the remains of this great metropolis still cover more than 77 sq miles. 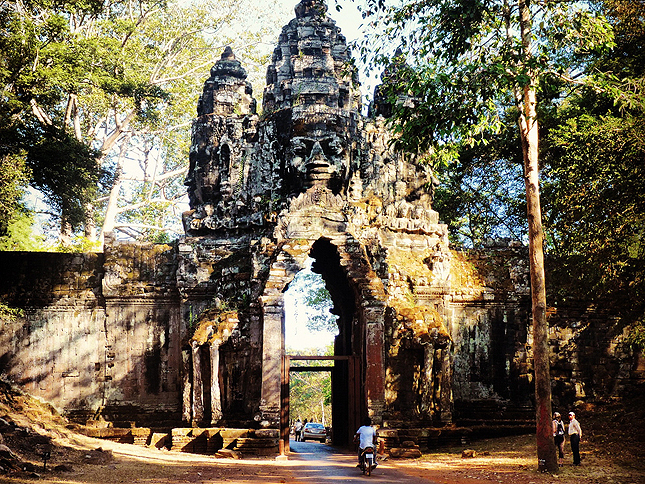 The guide book describes it as thus: The metropolis is located in a dense jungle on the hot and torpid plains of western Cambodia and it’s awe-inspiring temples transport you back to an enchanting and mysterious world of brooding grandeur and past glories.

Although the old wooden houses and palaces decayed centuries ago the stunning array of stone temples erected by the self-styled god-kings still stand today with names such as, The Bayon, Preah Khan, Preah Neak Pean and Ta Prohm to name only a tiny few. There are just too many palaces, temples and even a university to see in the couple of days that you are probably there for so you have to pick the best. My big insider tip is to get some motorised transport because without it you are unlikely to even scratch the surface of this amazing place and take plenty of water. 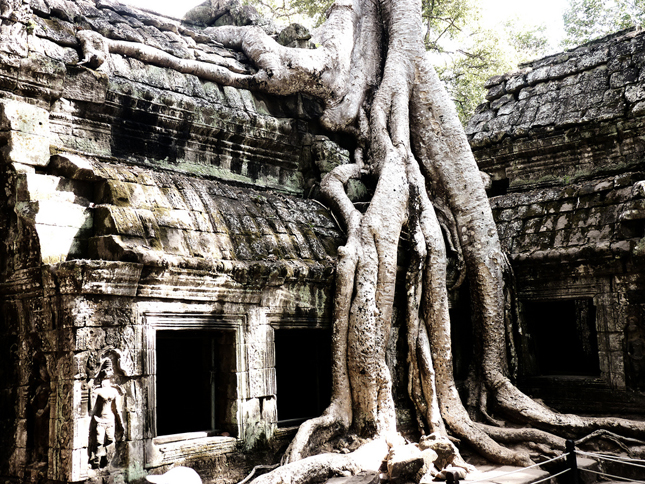 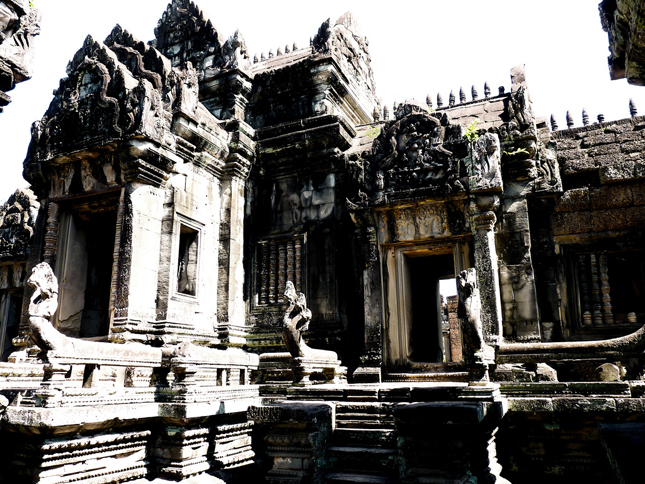 It would be foolish for me to go into minute details about all of the temples that we visited while on the circuit as there were just too many to mention and they all began to merge into one in the end so for the purposes of this blog post I will let my photos do most of the talking for a change. 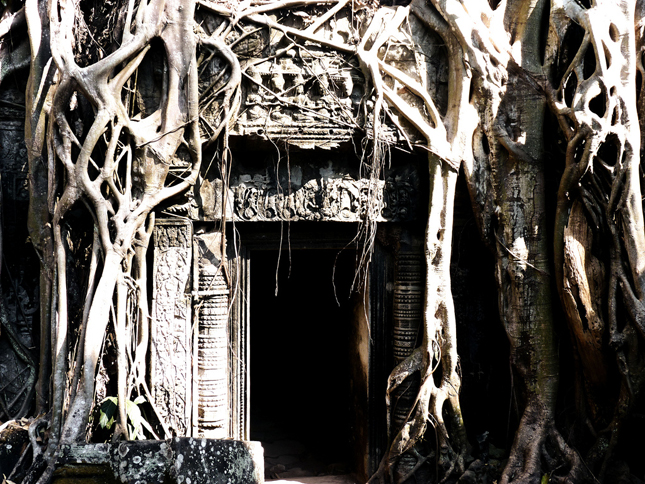 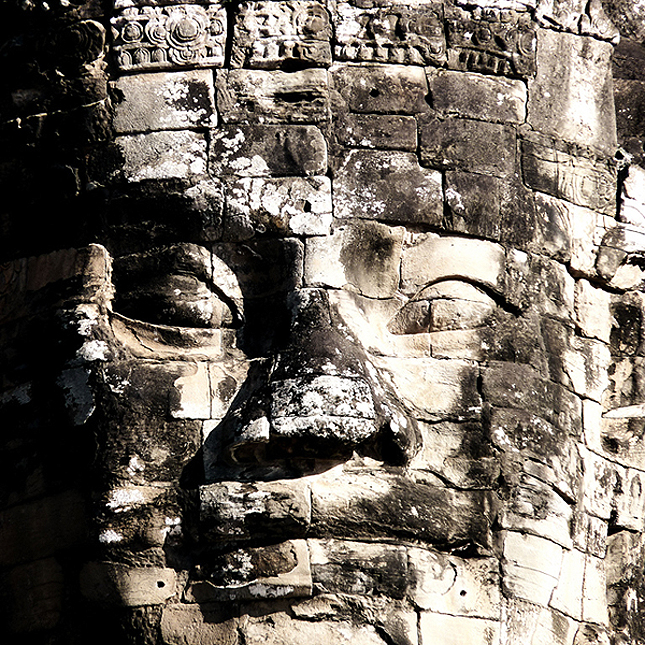 What I will say though is this, Cambodia was without doubt the highlight of my visit to Indochina and given the opportunity again I would not hesitate to go back. Angkor is everything and more that you can imagine such a place to be and two days is simply not enough time for a comprehensive visit! I could have stayed for a week or more and still not have seen all that there was to see. 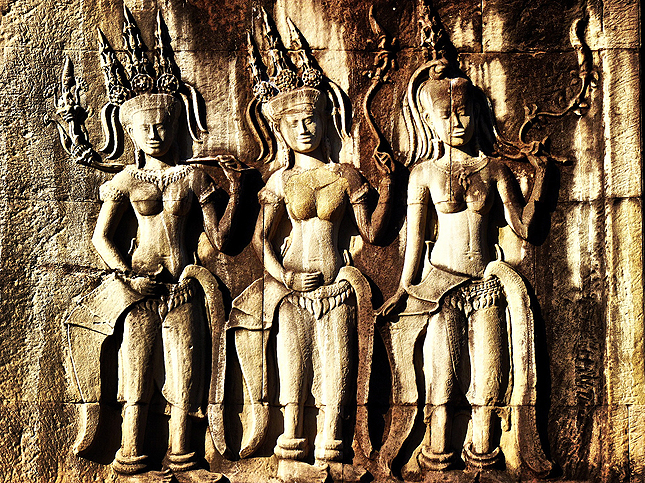 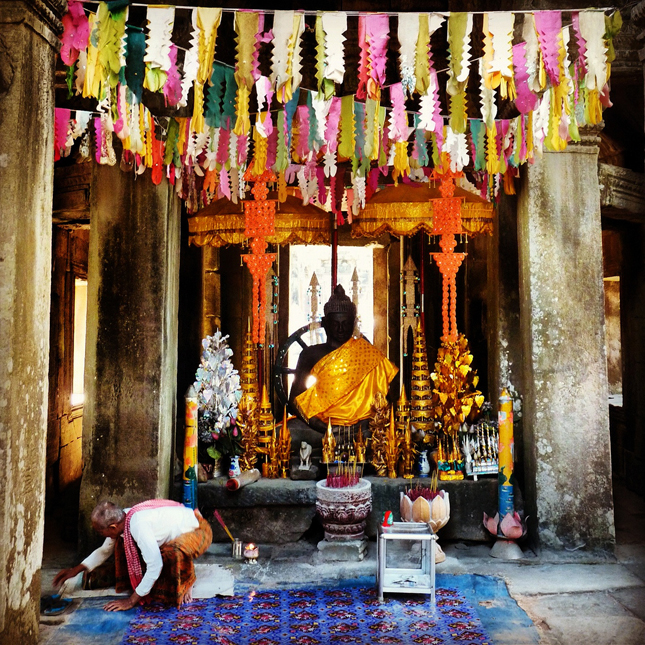 If nothing else though I implore you while you are there to make sure you see at least the temples of Angkor Wat, Angkor Thom and Ta Prohm as these are the must-do’s on either one of the circuits that you may opt for……oh and also get the fish to eat the dead skin off your feet while drinking a Tiger Beer in a bar while in downtown Siem Riep afterwards, your feet will thank you immensely for it after two hard days of hot dusty temple exploring. 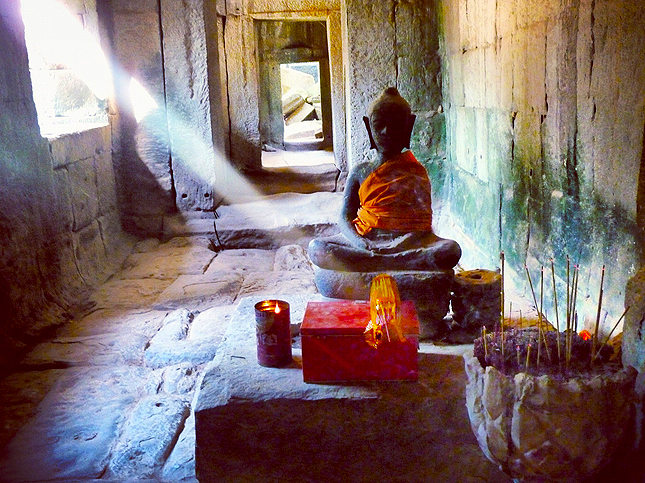 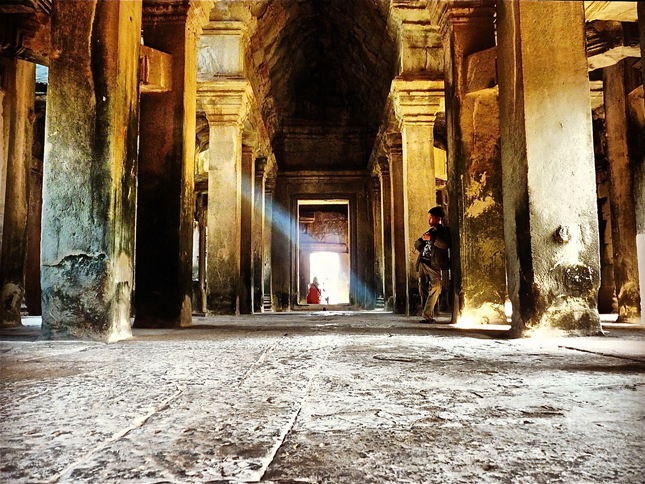 With my childhood dream now accomplished and after three days in Cambodia and at least some answers to my many many questions it was time to board a flight back to Saigon. I need to go back of course! Back to see all that I did not manage to see this time around and back to try to understand yet more about this most fascinating of ancient cultures, and you most probably will do too after visiting, but that’s the beauty and addiction of travel, once the bug bites there’s never enough time to see and do all that you want. 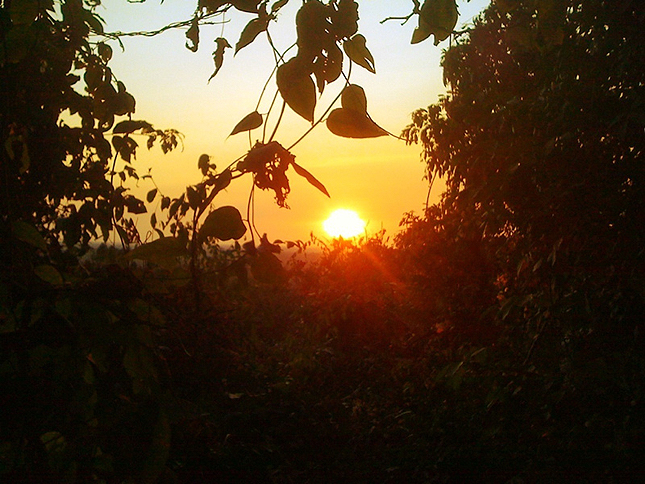 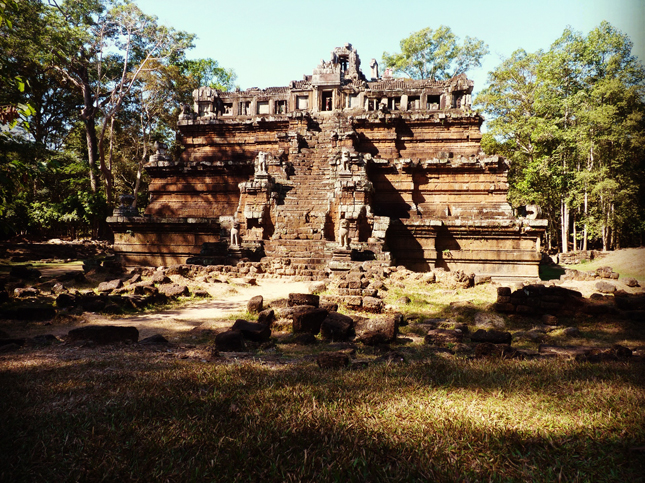 As a footnote on the last night in the commune I came down with a severe bout of salmonella poisoning which was to have a profound effect on the remainder of my travels, all of which will be revealed in the last post in the series…..The Island of Phu Quoc!