“Man discovers himself when he measures himself against an obstacle.”- Antoine de St. Exupery

The tent shook and the Sherpas woke me from a fitful slumber. It was time to go! Mr James, Mr James wake up! We go, we go!

The inside of the tent was covered in a thin film of frost and I could hear the light pitter patter of water drops cascading off the canvas, it was raining! That meant only one thing, further up the mountain it was snowing!

I was already fully clothed wrapped in my base layers while I’d been snoozing in my sleeping bag. I now put on my outer layers and checked my rucksack once again which I’d pre packed the night before. Nick my tent companion was going about his business in the same manner, we did not speak as we were both focused on getting kitted up. I tentatively started to unzip the tent to reveal a cold dark and wet night outside.

We were attempting an ‘alpine start’ for our ascent this meant the first few hours of the climb up the steep slopes onto the snout of the glacier and then through the boulder fields would all need to be climbed in complete darkness. This thought both invigorated me and scared me in equal portions.

We gathered in the mess tent all huddled together out of the freezing rain. The Sherpas had prepared some tea, coffee and biscuits. We sat in anxious anticipation looking at Rigzin the mountain leader to see when he would make the gesture to move out. But the signal never came, his poker face gave nothing away.

Finally he announced what none of us wanted to hear, he was delaying the start of the climb until the storm blew out. He knew this mountain better than any of us and anticipated that within an hour the rains would dissipate and more stable weather would materialise giving us a better window to start the climb in, better that than risking getting wet and cold with a further 12-14 hours ahead of us outdoors on the mountainside.

The wait seemed like an eternity. The atmosphere could be cut with a knife until finally the rain stopped and we kitted up again eagerly wanting to confront the challenge. Once outside we all naturally drifted into a running order within the lineup which stayed that way for most of the climb.

I was placed behind Nannang a three times Everest summiter who would help break trail for me. As soon as we moved out of camp we hit the snows that had settled on the cold barren ground. The night sky was clear and fresh with flakes still falling as we trudged up the dreaded scree slope and over the first col and out of sight of base camp.

The path undulated in the dark, our head torches and the moon being the only sources of light. We moved slowly like a stretched out caterpillar along the trail but I felt good, strong and rather toasty wrapped inside my big down jacket.

Complacency though soon set in after a couple of hours. We passed other teams in the dark always gaining more altitude, weaving amongst the snow covered mounds of moraine all around us. As the night drew on the temperature plummeted and what had fallen as snow earlier now started to freeze creating a slippery treacherous path. With freezing of course comes expansion and that expansion caused an incident that would halt our complacency in its tracks.

I first realised something was up when I heard a distant rumbling far above us. The rumbling became louder, then louder still! Next thing I knew Nannang was shouting instructions out to us “headlights up! Up!”. We all pointed our heads and torches up the dark rocky slope to our left. The rumbling increased and then what looked like footballs in the dark started tumbling down out of the void towards us, only these footballs were rocks (the size of footballs) and they were falling en masse from above us. “Run. run!” shouted Nannang.

I ran like never before! Sheer panic set in and we all legged it for our lives. The rocks came hurtling down and around us leaving a trail of dust and debris behind them. I dodged maybe two, possibly three rocks, one in front and two behind me as I scarpered along the path out of harms way. It was a timely wake up call that we were on a vey real and very dangerous mountain. 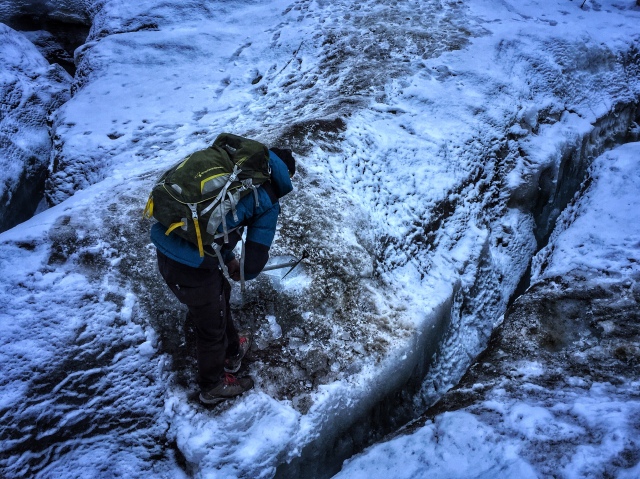 It took a time to compose ourselves and conversation dried up completely. We trudged on discontentedly until we hit the start of the glacier. To safely cross the glacier we needed to follow our guides leads to the letter. With a bit of guile we should navigate the hazard successfully. Surprisingly we didn’t bother to crampon up although most other groups seemed to, instead we struck out over the glacier straight away.

One of our team unceremoniously slipped while crossing a small crevasse and ended up being man hauled out in the darkness but we all just carried on as if nothing had happened, blocking out any negativity was by far the best way to proceed.

After the glacier came the dreaded Zig-Zags! These switchbacks would take us up to the col from where we would strike out along the summit ridge. The Zig-Zags were dreaded by all because it marked the start of the really steep elevation a mass of boulders and scree to be negotiated. Any resemblance of a path had been submerged in several centimetres of fresh snow and so route finding became difficult.

Nannang valiantly broke trail for what felt like several hours as we huffed and puffed our way up the boulders. Rockfall we had been told was once again the biggest danger on this part of the route, usually caused by heavy footed climbers above on a switchback running parallel to yours below.

Rather miraculously and unscathed we emerged just below the col as daybreak lit up the dark sky. The whole mountain lit up in a pinkish red glow as the sunbeams pierced the battlements of the surrounding peaks. The snowy mountains and the natural amphitheatre they created were suddenly illuminated as if by spotlights.

Once we hit the col the wind whipped up around us and we hankered down in the snow trying to get some quick sustenance down while struggling to put on our harnesses and rope up ready for the summit ridge.

The top of Stok Kangri looked tantalisingly close now. I harnessed up and found myself on a safety rope behind Nannang the Sherpa and Owen another of the paying clients on the trip. We started off up the icy ridge.

There were more people than I had imagined on the narrow ridge. With other climbing parties scattered all over the mountain making our progress hard going. Most we past seemed to be out of their depth struggling in crampons and straddling the rocks to get over them. We pressed on!

The rope jolted me up and down, my harness cut into my crutch but the summit was insight. A few more careful steps along the exposed scree paths and then a final push up the snowy dome at the top and I would have made it.

I turned the final corner and onto the last stretch to the summit. The snow was deep and I was puffing with exhaustion. I could now see the prayer flags fluttering in the summit wind from the highest point and then suddenly as if in a dream I was there!

I touched the summit flags said a heartfelt thank you to the Gods and then collapsed exhausted in the snow. I shook Nannang’s hand and we all congratulated each other as we trudged onto the summit one after the other.

In an area of virgin snow we all congregated to take in the panorama from the highest point in The Zanskar Mountain Range while Rod a member of the team popped open a small bottle of Whiskey. He gave a drop to the mountain and then passed the bottle around and I indulged in my first sip of alcohol in over three months.

The Essex Way - Stage 4. Great Waltham to White Notley. Possibly the most scenic and beautiful section so far. 11 miles further along the trail at the end of today.
Training for the big South Downs Way ride next weekend. Okay it’s not on the MTB but it was 50K of goodness along country lanes on the Road Bike and back in time to watch Le Tour.
Lightweight as possible is the name of the game! The South Downs Way is 100 miles long and most of that is off-road, I want to be as light as possible when I tackle it next weekend.
Getting prepped for my next adventure. 100 miles off-road end-to-end along The South Downs Way. #southdownsway #southdowns #mtb #bikepacking #bivvy #bivvylife #gravel #offroad #100 #adventure #travel #cycling #bicycle #neverstopcycling #neverstopexploring
The Essex Way - Stage 3. Salt’s Green to Great Waltham. Picturesque with sunny intervals on todays walk. Three villages and miles of unspoilt countryside to amble through. That’s another 8 miles banked.
The Essex Way - Stage 2. Chipping Ongar to Salt’s Green. Another 8 miles in the bag and two stages completed out of a possible ten. A good 16 miles into the route now. #theessexway #essex #longdistancewalking #getoutside #training #travel #neverstopexploring #neverstopwalking #LDP