We drove for hours across a dusty and barren landscape which made up the Indus Valley. Our minibus was headed for Alchi Monastery a few hours up river and deeper into the Ladakh countryside. The Monastery consists of a small collection of monastic temples dating from between A.D.958 and 1055. 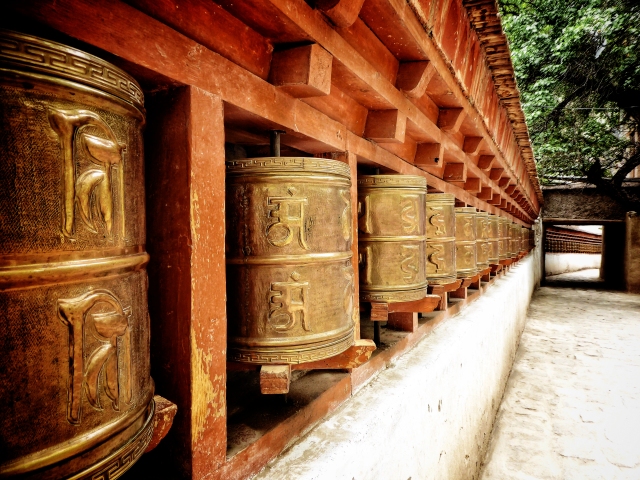 According to local tradition the complex was founded by the revered guru Rinchen Zangpo famous for translating Sanskrit Buddhist texts into Tibetan. It is therefore both a very old and a very important monastery and we were headed there as part of our acclimatisation and cultural discovery programme in Ladakh.

According to ancient texts the tree outside the monastery is of a species not native to the land thereabouts and folklore dictates that it grew as a result of Rinchen Zangpo having an epiphany that he’d found the right spot to build a monastery and so he proceeded to plant his walking stick firmly and permanently in the ground to mark the spot from which the tree we see today grew.

A great story, highly improbable of course but I’d have bought into it in all probability had I been around in the early 11th century and it still pulls in the punters a thousand years later.

The monastery today has three major shrines: the Dukhang (Assembly hall), the Sumtsek and the Temple of Manjushri, all dating from between the early 12th and early 13th centuries. Several small Chortens litter the complex that all appear to have seen much better days.   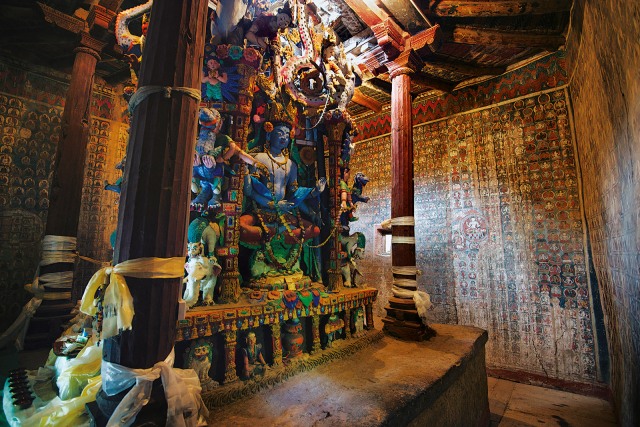 Disappointingly the monastery itself was rather underwhelming. Although interesting it was very easily seen within an hour and all too soon thoughts turned to the rather uninteresting two hour dusty and bumpy drive back to Leh.

The resident monks seemed jaded by pilgrims and tourists and the whole visit was rather hasty. But the old carved deities to the Gods were undoubtedly impressive and once inside the dark confines of the sacred halls it was not hard to imagine that little had changed in a thousand years.

Interior Monastery shots used in this blog post are all sourced online and not my own due to cultural sensibilities and to preserve the interiors of the ancient buildings.