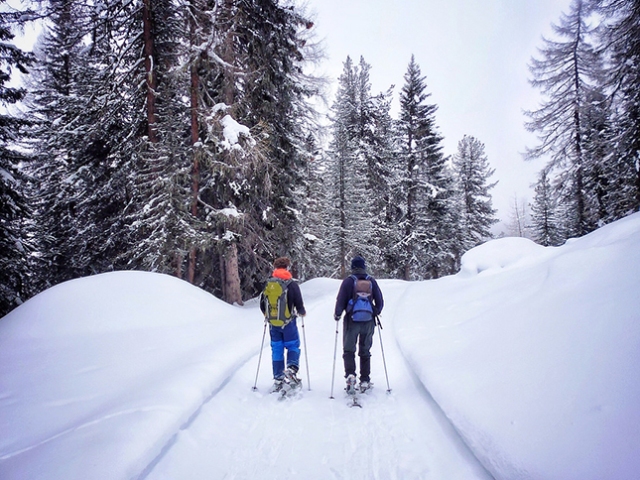 I’d never put on a pair of snowshoes before, but there’s always a first time for everything!

I’d primarily gone to Italy this year to indulge my passion for downhill skiing, but presented with the opportunity to hike around one of the most beautiful valleys in the Dolomites amid deep pristine snow with some breaking of trail thrown-in in a pair of snowshoes was just too good an opportunity to miss.

Originally down for hiking among the Cinque Torre region some forecasted and incoming bad weather had instead forced us to change our plans and so we had now opted for a lower level – but equally picturesque – hike around the Val Badia.

The Runch Hut Round is directly located above the village of Pedraces. Using the village ski lift system we were quickly transported up to Santa Croce at 2045m saving us  what would have been a tiring and very time-consuming slog uphill to the trail head. 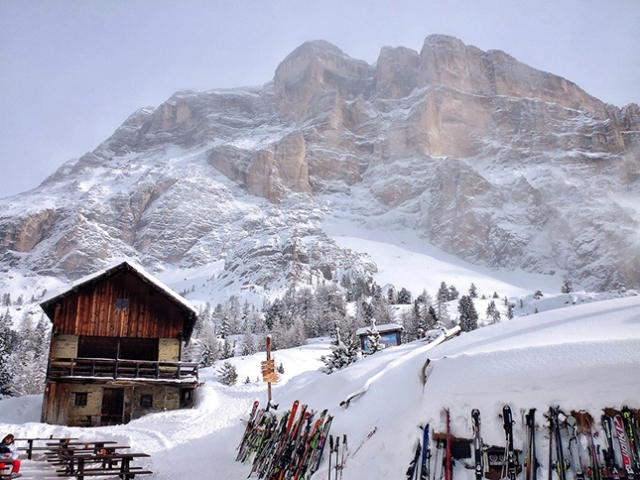 We started out from the picturesque church at Santa Croce and it’s nearby rifugio gently heading around the base of the rugged pink cliffs that tower over this part of the valley. The route stuck closely to the edge of the cliffs before veering off into high alpine meadows that were all but buried under deep virgin snow. 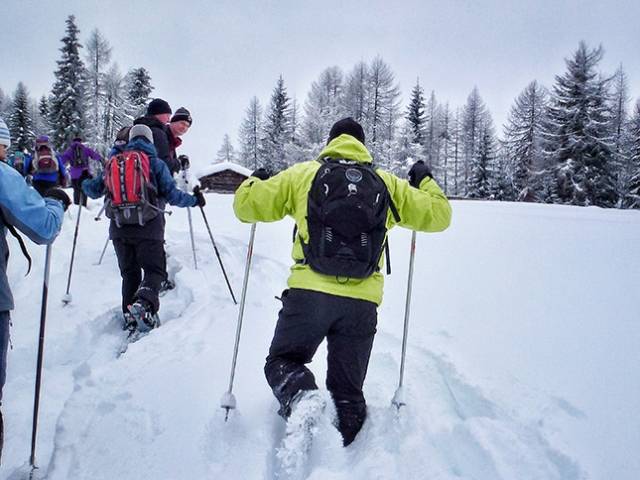 We trekked for a couple of hours through unimaginably beautiful mountain scenery with incredibly vistas in all directions zigzagging between mountain huts and through small coppices of pine trees until we eventually arrived at the famed Runch Hut, the namesake of this route and it’s primary objective. 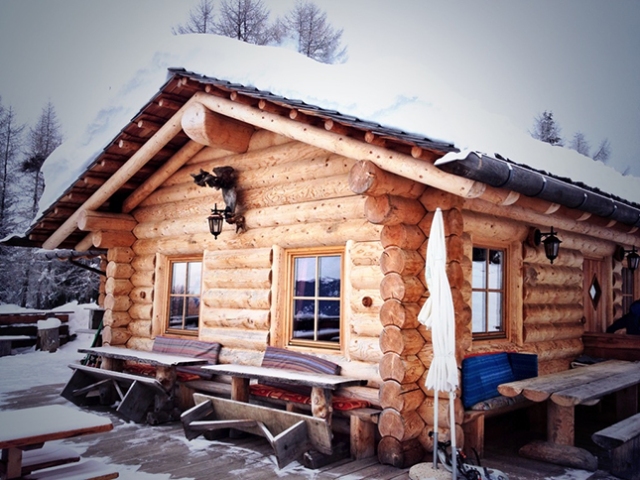 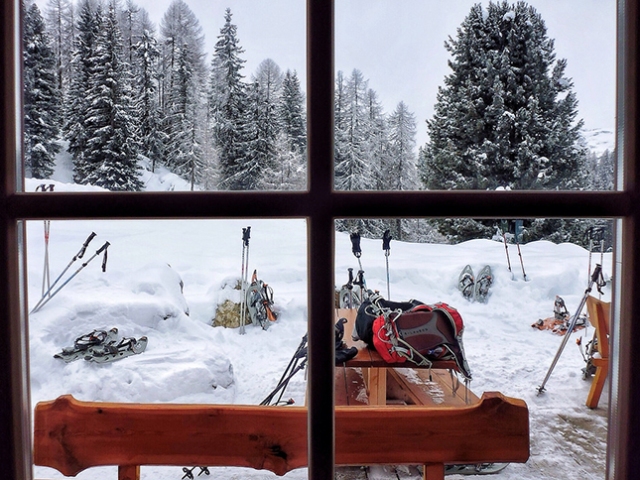 Kicking off our snow shoes for an hour or so we warmed up inside the hut wolfing down the local delicacy known as ‘Skiers Breakfast‘ which consists of a kind of ham with mashed potatoes with sauerkraut covered with cheese and topped off with a fried egg…delicious! All washed down with a local refreshing and cold beer. 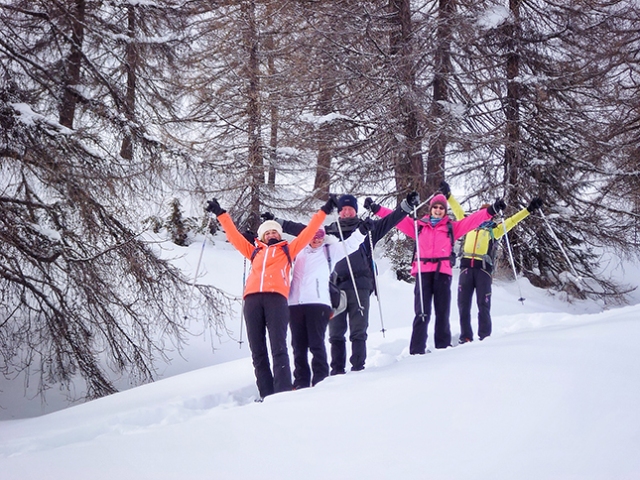 Suitably fed and rested and now braving the cold once more we started to descend along narrow mountain tracks, almost impossible to discern under so much snow, all the time accompanied by tremendous views of the surrounding mountains. Before we knew it we were back down in the valley having descended several thousand feet in a matter of a mere few hours now with the village in sight. Five minutes later and we found ourselves heading towards the village cake shop known as ‘Ricky’s’ to stuff our faces once more with some local strudel and coffee. 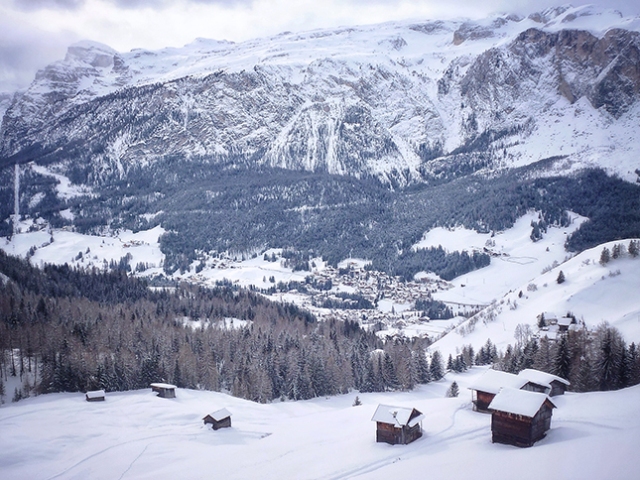 As an introduction to the delights of snow shoeing I don’t think I could have picked a better day’s choice of walk, of course the culinary delights peppered along the way went a long way towards helping. But the route was to die for, the technique to snowshoe successfully was easy enough to pick up – even for a novice – and in no time at all I had been speeding along over snow several feet deep amid amazing scenery in alpine meadows.

I am now as you may have gathered a bit of a convert to the sport of Snow Shoeing! The Runch Hut is a fairly sedate hike for anyone starting off and wanting to try the sport out in a non too taxing mountain environment, but what it lacked in technicality it more than made up for with its stunning beauty and amazing 360 degree panoramas.

Whereas it will still take a lot to tempt me away from my ‘Carver’s’ whilst in the mountains I can definitely see the positives of snow shoeing. Furthermore snowshoeing adds another welcome dimension to that annual winter mountain trip that I can now look forward to with even more eagerness as it comes around each year.

More Pics from The Dolomites Ski Adventure can be found over on Flickr and by direct feed here: http://www.fluidr.com/photos/jameshandlon/sets/72157640344946915