I’m just back from northern Spain from what turned into a bit of an epiphany for me. I’d been longing to test my mettle in mountains over 2000m in height for some time now when the Picos range in northern Spain suddenly cropped up on my radar at just the right time.

Fairly unknown as a range, in a very traditional part of Spain and with a character that was unique they ticked almost every box. So last week we flew out to Santander picking up a hire car and then driving the short one and a half hours up into the mountains along some very twisty and windy roads.

We stayed just outside the very quaint mountain town of Potes in a village called Tama in a local Posada chalet style hotel. The surrounding mountains looked stunning when we arrived.

For the first few days however the weather gods were not too kind to us and we found ourselves reduced to hiking some fairly short distances on quite low-level trails, beautiful but not really what I had come for, the higher routes constantly cloaked in mist.

Then quite unexpectedly and on a rare day of sunshine Coriscao Peak became the first prominent mountain to be bagged on the trip.  A grassy and broad ridged mountain, very reminiscent of the Lakes back home but considerably taller in height at 2234m. This mountain’s beautiful summit boasted panoramic views that were both sublime and engaging, coupled with a short detour en-route to bag the subsidiary peak of Pena Caseajal the day proved to be a very good mountain day out and a bolt from the blue, but still I longed for yet more challenging adventure! 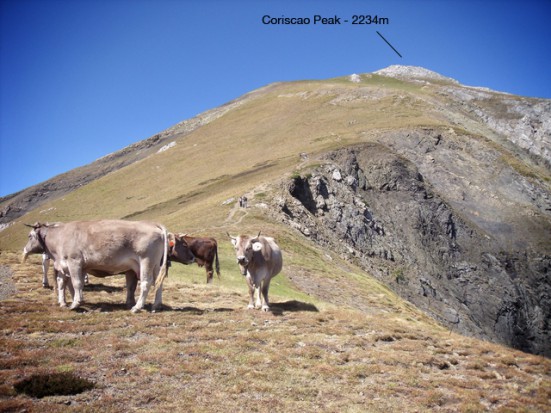 Over the next two days although wet and often misty we did manage to squeeze in some of the classic must-do hikes in the area, even though the weather was sketchy at best. We hiked the  well-known and popular Fuente dé Classic which involves walking through an impressive glacial cirque high in the mountains having taken possibly the fastest cable car in europe up 753m of ascent in a mind-blowing 3 mins 40 seconds but upon reaching the path disappointingly once again many of the peaks were shrouded in mist.

Then the following day we walked the 15 miles along the spectacular Cares Gorge, a deep narrow canyon that separates the western and central massifs which is home to a route which only exists because of an amazing feat of engineering in the 1920’s when the water canal for the Poncebos hydro-electric power station was conceived. Both amazing hikes in their own right but not really what I was here for so still I longed to see those monolithic mountains for real that I ‘d seen in so many photos when back at home. 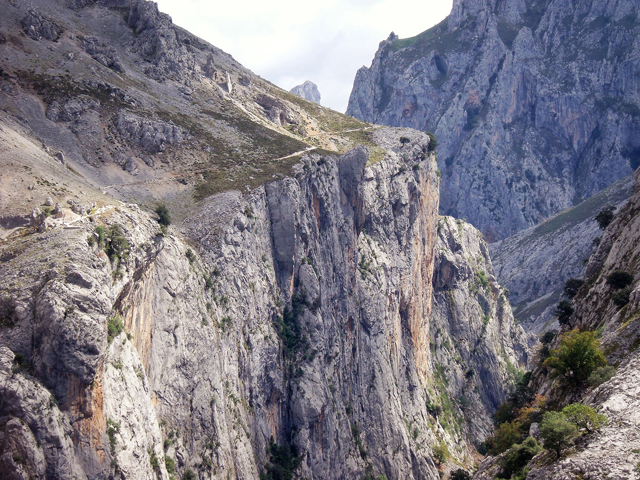 Then it happened for me, the weather window that I ‘d been after suddenly appeared, the sun was out and the gloves were off, the big boys were there for the taking! Torre de los Horcados de Rojos at 2502m became the first major objective on the radar. 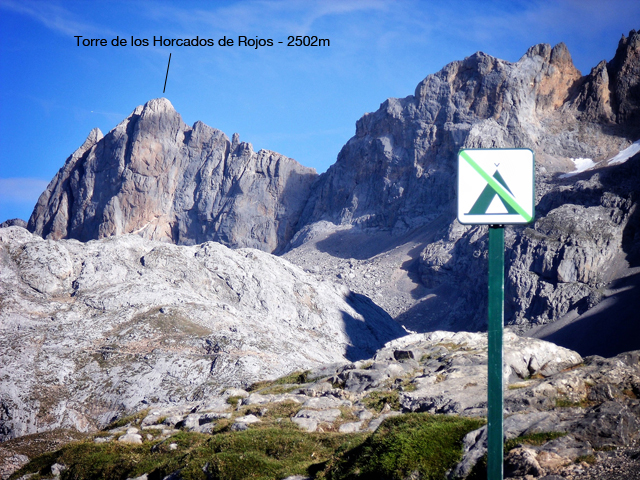 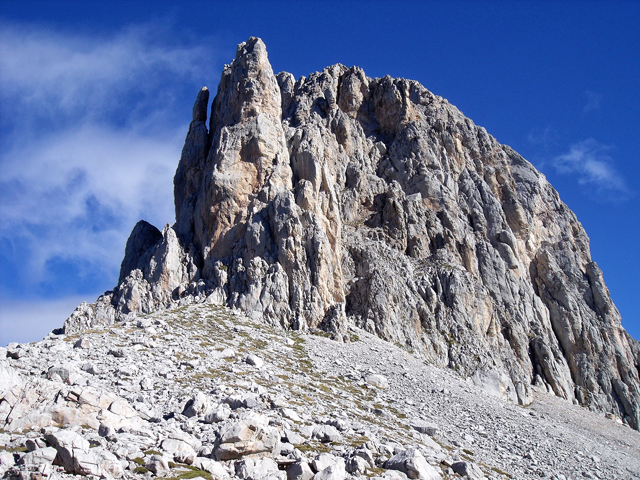 Whilst staying at the Posada Hotel in Tama one of my climbing hosts for the week was a young rock monkey named Ric King known for his crazy climbs in the Dolomites and famed for his Via Ferrata prowess Ric took us deep into the Central Massif and skilfully guided us to the high level pass just below Horcados Rojos. One look at the ascent route told me that this was going to be something beyond the level of mountaineering I had done before and was way outside my personal comfort zone, but still, what I lacked in experience I made up for in my gameness!

I gingerly followed Ric up the scree and steep rocky ascent route. Near the top I traversed an unspeakably exposed ridge as my legs wobbled and shook beneath me but finally I topped out at 2502m, my highest ascent to date. My legs were shaking but the views were awesome! 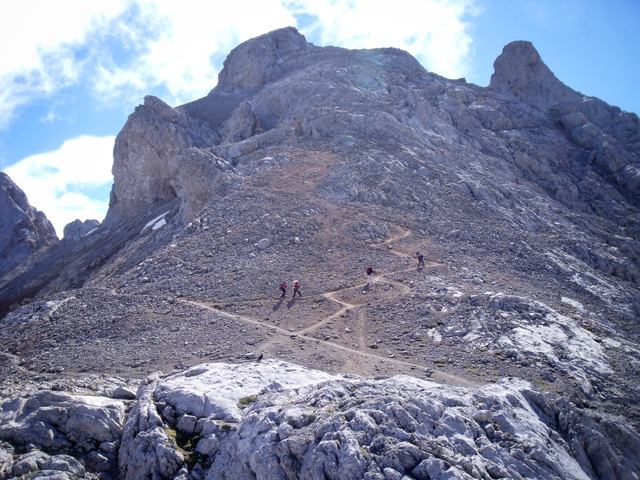 From the summit Ric pointed out Pena Vieja, the highest peak in Cantabria. Were we up for it? This was the question posed by Ric. Yes came  the rather timid reply.  So no sooner had we committed than we started off to descend rapidly in the hope that by getting a wiggle-on we would give ourselves enough time for the long traverse and lead-in to our next objective the ominous Pena Vieja. If I had thought Torre de los Horcados de Rojos looked scary then Pena Vieja from afar was off the Richter Scale! 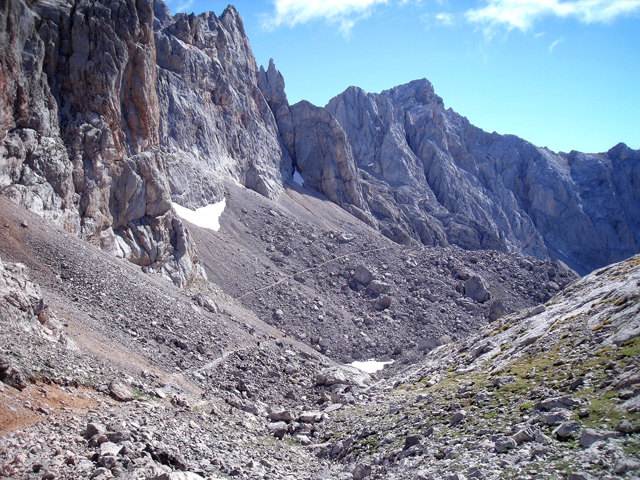 The long and hard approach up shattered scree and very feint paths was scary enough but when I saw the final route to the top from a vantage point at Cdo de la Canalona I knew I was going to be well outside my comfort zone for the next hour or so. 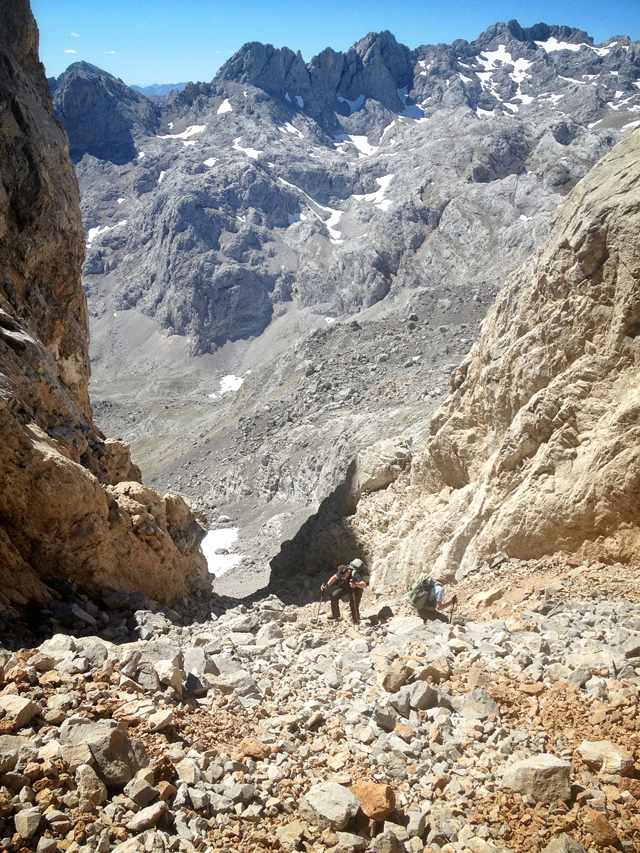 Basically for that next hour I was pretty scared, pretty quiet and pretty apprehensive! But I carried on and made the summit despite some fairly dodgy breathing at over 2500m – probably induced more by fear than actual altitude. 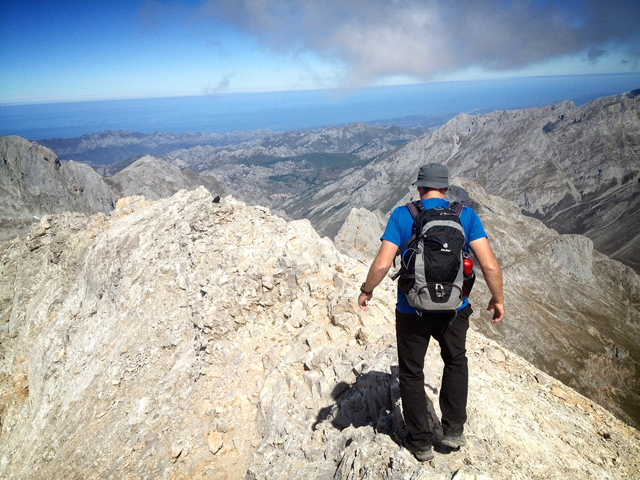 Then the epiphany happened. Being petrified, excited, knackered and outside my comfort zone all at the same time was the best feeling I had had for ages. I was totally in the moment, totally focused and totally intense. I always thought I knew what drew people to the mountains but now I knew for sure. There is no finer playground on earth than the mountains! They are dangerous, beautiful, challenging and fulfilling. Not many other sports or pastimes can boast such a roll-call. I was hooked!

The very next day together with 14 other mountain junkies I summited Pena Prieta – the highest peak outside the Picos range at 2536m and again enjoyed the experience immensely.

I’m now hooked on attempting more peaks over 2500m and after reaching 2613m on the summit of Pena Vieja a whole new level of mountaineering is opening up for me I hope. Instead of scratching my itch by spending time in the Picos Mountains the itch has instead just intensified and I can;t scratch it quickly enough! I’m now looking at the Dolomites for next year (if I can afford it) and 3000m plus attempts god willing. For adventure and adrenaline the week just spent in Spain has to go down as one of the best of the year.

Thanks for reading and do stay tuned to see where this latest venture into travel and adventure takes me.

For more photos from the beautiful Picos Mountains check out my Flickr page:
https://www.flickr.com/photos/jameshandlon/sets/72157638635123975/

6 thoughts on “High adventure in the Picos de Europa Mountains”