Re-education may refer to: A euphemism for Brainwashing, efforts aimed at instilling certain beliefs in people against their will; (trại học tập cải tạo) is the official title given to the prison camps operated by the government of Vietnam following the end of the Vietnam War for this purpose.

Wow, that’s a very profound way to start a travel blog entry I hear you say, but that’s exactly how you feel once you leave the confines of the Reunification Palace in central Saigon! Our second full day in Vietnam and the places that we were going to visit would eventually fill us with dozens of questions and opposing viewpoints to argue about over dinner that evening. 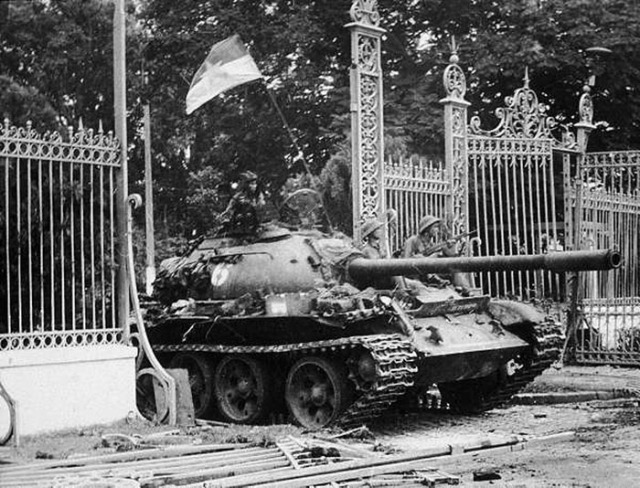 We started the day by walking to ‘The Reunification Palace’ formerly known as the Independence Palace, today it’s a famous landmark in Ho Chi Minh City. Personally I knew only one thing about the Palace and that was that it was once the site of the end of the Vietnam War during the Fall of Saigon on April 30, 1975, when a North Vietnamese Army tank crashed through its gates, the famous image being flashed all around the world on TV channels and in all the newspapers of the day. I could vaguely remember the black and white image from my childhood but it’s true context was lost to me at such a young age.

Construction of the Palace we see today started on 1 July 1962, after a botched assassination attempt on the puppet ruler Diệm and his family. Evidently two pilots of Diệm’s own airforce flew two A-1 Skyraider aircraft towards the palace and bombed it, instead of going on a raid against the Việt Cộng as ordered. However, Diệm never saw the palace rebuilt to completion as he later got his comeuppance anyway in a  coup d’état led by a General Dương Văn Minh. The completed hall was eventually inaugurated on 31 October 1966 by the chairman of the National Leadership Committee, General Nguyễn Văn Thiệu, who was then the head of a military junta.

That’s kinda how things seem to roll in Vietnam, there are lots of complex names vying for position and leadership against a backdrop of political intrigue that make the Watergate affair look like mere child’s play. It’s complex, very complex, luckily for me I had studied a bit about the Vietnam War to O’Level standard at school and so had at least some rudimentary understanding of what the hell I was actually looking at.

But things are never what they might at first appear to be in Vietnam and things started to get really weird even though I was armed with the knowledge of the historical and political backdrop to the building. Weird because it was becoming damn near impossible not to make conscious comparisons of this the Reunification Palace to that of a set in an episode straight out of ‘Team America’ or ‘Thunderbirds’! It just had Gerry Anderson written all over it in large letters (sic) 1960’s children’s sc-fi puppet series. Together with Team America’s puppet portrayal of the mad Korean dictator Kim Jong Il it all just seemed impossibly surreal!

Dodgy chandeliers hanging from minimalist concrete rooms decorated with flamboyant gold gilt Louis XVI furniture sitting on 1970’s fake fur rugs! It was mind-blowing! Dictators really did and do live like this, oh my God!

The puppet set look was near complete with 1960’s retro looking TV sets and telephones not to mention the old vertical twisting paper blinds on the windows which were so popular back-in-the-day. The Palace has all the trappings a mad despot would desire: a heliport on the roof, a rooftop bar and disco floor, a snooker and games room, of course a private red crushed velvet cinema complex, bomb proof subterranean maze complete with war control rooms, dozens of bedrooms, a grand staircase and not to mention the over the top conference rooms designed to make a big impression on visiting dignitaries. 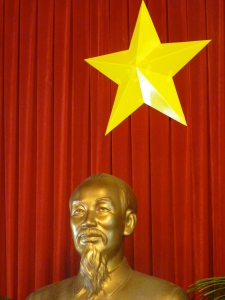 Just when escape to the outside world beckoned we had to sit through an old and really poorly edited propaganda film telling us that all we ever knew about Vietnam and its leaders was wrong and in-fact the imperial aggressors were satin in disguise and these chaps in charge now were actually just badly misunderstood. The catchy propaganda songs that all the pretty young peasant women were gladly singing along to throughout the film managed to stick in the mind for the rest of the day causing a cacophonous sound in my head for hours to come!

Eventually having been thoroughly re-educated we did escape and took a stroll around the Palace grounds to see the assorted military regalia strategically placed around the gardens to remind us all of what had happened here. Eventually around lunchtime we exited ready and eager to visit our next destination, relieved to have metaphorically escaped, but still ever ready for our next bout of indoctrination at ‘The War Remnants Museum‘. 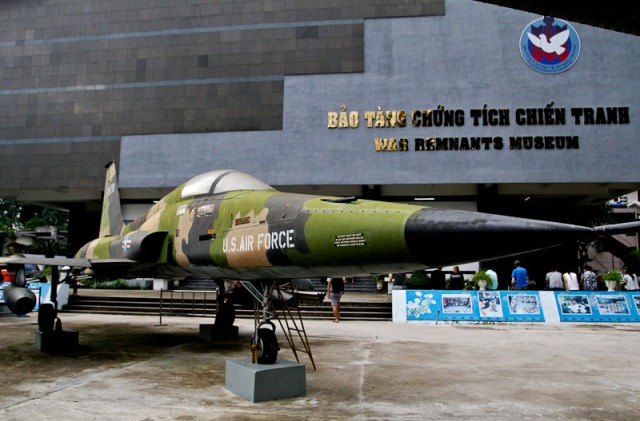 I knew to a degree what was coming…..the Vietnam War was about to be rewritten from the victors perspective, the museum is operated by the Vietnamese government and was opened in September 1975 as ‘The House for Displaying War Crimes of American Imperialism and the Puppet Government of South Vietnam’, I think you get the general gist and once again there we go with that overriding (albeit differently conceived) puppet theme again!

However, when you travel I believe you have to enter into everything with an open mind, otherwise what is the point in traveling in the first place. After all I could read all about the Vietnam War safely at home, but by coming here and seeing the tangible remains of a vicious conflict I hoped I could fill in some of the blanks in my mind and that the experience might help me to see the war from a fresh perspective other than the big budget chest thumping Hollywood blockbuster war films of the west.

The museum comprises of a series of eight themed rooms where one building reproduces the ‘tiger cages’ in which the South Vietnamese government housed political prisoners where graphic photographs add credence to the pigeon English propaganda captions throughout. We spent several hours wandering around the various floors looking, reading and observing.

So did it open up my mind, well yes it make me stop and think, yes it made me question some of the facts and figures pumped out from the American war machine and yes it did make me realise that there are always two sides in a conflict, and to never take what you hear, or are shown, as gospel, there is always a hidden agenda somewhere.

But the annoyingly simplistic and in your face way that the communist government shout this at you from every angle makes it hard to take it all as seriously as you should and in the end captions that quote ‘the cowardly scared American soldier running from the scene of his crime‘ tends to provoke laughter instead of the intended feeling of disgust and remorse. It’s a strange place to visit but one that you really should make time for if you are in Saigon, be warned though it will leave you on a bit of a downer (as it quite rightly should), so go prepared.

So to recap by the end of the day I had seen a Gerry Anderson inspired dictators folly (sorry I mean palace) and found out that everything I ever knew had actually all been lies, damn lies! Not a bad days work all in all and it wasn’t even tea time yet, but the day still had one more twist in store for me, for I was about to embark on a journey of a lifetime aboard ‘The Reunification Express’….but hey that’s all for my next blog post.