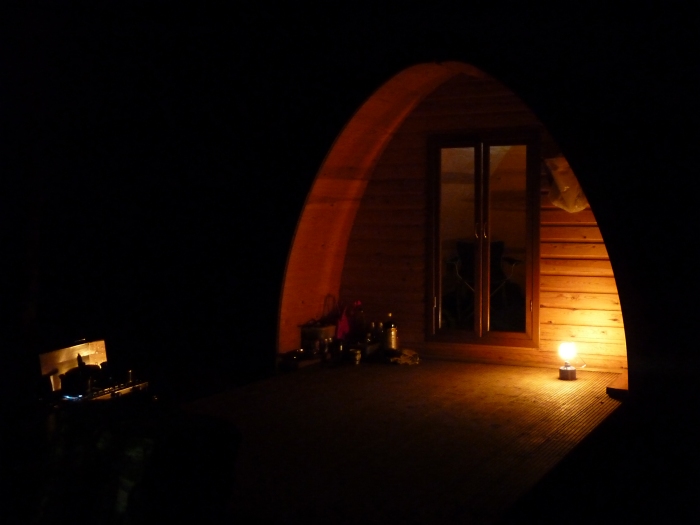 It is a couple of weeks now since I returned from a wet and windy Lake District and my week spent there in a Camping Pod. This being the first time that I’d decided to use a Pod for camping I thought it might be good to share some of my thoughts and experiences from the week with others on this blog who just may be tempted to try it out for themselves.

We chose a week towards the end of October for a first poding trip as it’s often too cold by this time of the year to enjoy a week away in a family style tent, but we also didn’t want to go to the expense of a B&B or Hotel for the week and to be honest with so much beauty around in The Lakes we prefer (whenever possible) to be much closer to nature and the surrounding hills themselves than stuck in some old town house B&B or corporate style bland hotel.

So we chose a Camping Pod on ‘The Quiet Site’ overlooking the beautiful Ullswater in the Eastern Fells. The campsite is a real gem set in a fantastic setting with hiking aplenty right on your doorstep and directly from your Pod door.

The pods are situated in a couple of tiny glades on the hillside surrounded on the site by camping and caravanning pitches, but are hidden away enough to keep that feeling of integrity required to give the feel that you were still in a tiny wilderness cabin.

The pods themselves look gorgeous and at first glance seem quite spacious both inside and out. This however is a fallacy as once you move all your camping gear in there is very little room left for moving around inside the cabin.

A double air-bed once inflated for example plus two sleeping bags, a hold all maybe and a few bags containing food, supplies and various toiletries pretty much filled the vacant space to full capacity. We later found that pitching the air-bed across the back of the pod leaves optimum space for some living quarters (cramped as they are).

The Pods come equipped with a pretty useless lamp which is way below par for reading but does (I admit) lend a warming glow to the place, my advice though is remember to take a powerful tent lamp with you, battery powered, as gas burners are for obvious reasons not allowed inside the Pod.

The Pod also comes equipped with a pretty useless oil fuelled mini radiator which once warmed through does omit some heat but is hindered by the fact that it works on a timer which lasts no longer than an hour at a time leading to freezing nights of waking every hour or so to punch the activation button again and again and again!

Although the Pods are insulated with sheep wool allegedly I defy anybody not to freeze their butts off in winter. Although it was not particularly cold during our week externally, during the night we repeatedly froze and ended up joining sleeping bags together to garner up some combined warmth, which helped, but of course if you had gone with a couple of mates questions would have to be asked about this kind of behaviour!

Damp is another issue that you may not be expecting to encounter in a sealed wooden pod, but you would be wrong on this count. An accepted part of camping dampness might be but you would not expect to find this problem on your list in a wooden insulated and heated cabin. So be warned!

But it’s not all negative, not by a long way, there are many pluses to camping, pod styli. A real plus is the fact that you will not be awoken by the dawn chorus, or indeed snoring from your next door neighbours tent as the sound proofing is really top-notch. The pods also have a nice large decking area in front of them for barbecues and general outdoor cooking shenanigans which helps give you that all important cooking outdoors taste and feel to meals that is so much a part of the camping ethos. On this particular site the fact that in the old barn there are fridges and freezes for you to leave your meats and dairy produce in during the day is also an added plus as shops are some distance along narrow country lanes.

So the real question is; Would I Pod Camp again? Well as an alternative to winter camping I am still not fully convinced, given that you can rent proper log cabins during the low season with double glazing and full heating plus a comfortable bed for not much more, (and in some cases a lot less) I wonder whether the Pods are missing a good proportion of their market by being relatively pricey at between £30 – £45 a night in October. Yes they are fun and yes they are funky and yes they usually command the best positions on the campsites but they are a bit dare I say a case of style over substance, and considering you must already be a camper to have all the required gear to make yourself comfortable for the week I just wonder what market they are really aimed at.

From Spring until early Autumn I will stick to my tent I am afraid and if I were going away to Northumberland, The Lakes or Dales for example in winter I would instead opt for a Lodge or Cabin – personally speaking.

But give it a go for yourself, it’s not all bad and indeed some of it is a great deal of fun! If you feel the urge and have the time then please let me know if you have differing opinions or experiences of Pod Camping by commenting on this blog post so that we can cover all angles and sides of the argument for anyone reading.

Thanks for reading, cheers for now, and happy camping in whatever form it takes.