The Three Peaks of Yorkshire is a 25 mile circular challenge hike against the clock (12 hours being the limit). The route normally starts and finishes at Horton-in-Ribblesdale at the Pen-y-ghent Cafe, the hike visits the three highest peaks in Yorkshire – Pen-y-ghent (691m), Whernside (728m), and Ingleborough (723m) – in that order, making a total ascent of 1586m (5202ft). Everyone without exception attempting The Yorkshire Three Peaks Challenge Walk should be fully prepared and equipped for this demanding outdoor challenge.

I awoke at 4.20 am in my tiny tent wrapped up snugly in my sleeping bag, the effort to get out and into the cold was incalculable. The moon was illuminating the still, cold, dark and starry sky as I stiffly walked up to the farmhouse in an attempt to use the outside toilet for the first time of the day.

But I was not despondent, on the contrary I was as stoked as any man could be because today was the day that finally I got my crack at the Yorkshire Three Peaks Challenge. It had been a year in the organising and what had felt like an eternity to get around to, but finally the day had dawned and in less than 2 hours we would be clocking in at the Pen-y-ghent Cafe where in another 12 hours – or under – we would also hopefully be clocking out, as we successfully completed this unique mountain challenge.

The omens were all good, we had a break in the dismal British summer weather, we all felt as fit and healthy as could be expected from a group of middle aged men and the ground felt fairly solid. We heated up some sausage and beans over the camp stove carried out a final kit check of our rucksacks and left to drive the short 5 miles along the quiet country lanes to the village of Horton ready for the off.

With clocking in forms already filled in the previous night it was an easy matter to post them through the cafes letterbox at exactly 6.16 am and then we were off.

The team consisted of myself, Andy and Graham. Andy had driven all the way up from Cornwall and I had picked Graham up at Mansfield in the car on the journey north, all of us eager to test and prove ourselves against the best that Yorkshire could throw at us. 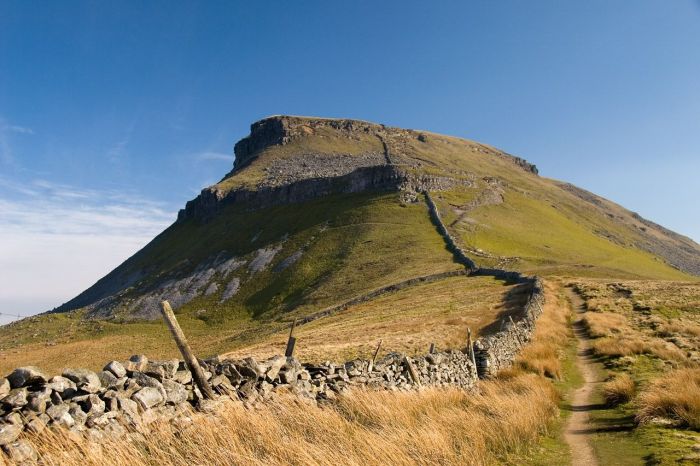 And it didn’t take long to have the first hit of the day, as on leaving the Pen-y-ghent Cafe Andy opted to start the hike by becoming navigationally challenged, and proceeded to yomp off in the wrong direction, much to the amusement of fellow hikers already mingling outside the cafe. Once our red faces had died down and now thankfully back on track we left with a spring in our steps towards the first summit of the day and our first test, Pen-y-ghent!

The approach walk to Pen-y-ghent developed into a beautiful morning hike in the early sunshine, with fantastic shadows being cast across the landscape as we neared the peak. A quick tentative glance up at the rocky scree riddled route towards the summit, and then we set off scrambling up eagerly. I became instantly surprised at how hard I initially found the climbing, I put it down to nothing more than lethargy from the early morning start, and the fact the my body had not yet had time to adjust to its rhythm’s for the day. My teammates however seemed unpreturbed as they hopped from rocky ledge to rocky ledge, eating up the ground above and below them.

The first peak of the day came and went in double quick time and we descended almost immediately towards the lower moors and the dreaded area of the bogs to the NW of Pen-y-ghent! The bogs, oh how we had worried and fretted over the bogs! Do we avoid them and navigate around, adding extra time and mileage to the route, or do we risk a full frontal assault on them and risk waist or even shoulder deep submergence? We opted for a fairly full frontal approach to hopefully save time in the long run.

The ground was like a sponge though, sodden to its core, and time after time we were engulfed up to our kneecaps in mud, water and peaty gunk. But a feint path could be determined and we pressed on eventually emerging around an hour later on the other side, our energy sapped, our gaiters covered in mud and peat, but victorious and still on time!

With our worst fears behind us (or so we thought) we made for the only tarmac section of the route and the long road march towards Ribblehead Viaduct and our next point of reference. We hit the road in good spirits and marched along it at a fair pace, all confident of tackling ‘Whernside’ the second summit away in the distance with comparative ease.

We passed the iconic Ribblehead Viaduct (the scene of many a fine photograph and oil painting of the bygone golden age of steam) as we marched ever onward towards the tiny aqueduct further along the valley at Little Dale, here we intended to cross over with the tracks below us.

Beyond the aqueduct and the slog uphill began for real! The ascent starts in an area called ‘Slack Hill’ and slack is exactly how I was beginning to feel! As we forged ever upwards I became aware that my colleagues were gradually distancing themselves from me as my slow plod became ever slower. Thoughtfully Andy and Graham my teammates stopped at an area of pot holes around half way up just before the turn due south and the toughest part of the route, they quickly checked on my progress – or lack of!

Why did I feel like this? Why was my performance so woeful? Questions I could not answer, or even have the time to dwell on! I pumped myself full of Glucose tablets and Isotonic aided fluids, rallied myself inside and insisted on waiting around no more as time was of the essence. Onward we pushed. Whernside’s summit was gained around 11.35 am and we promptly dumped our heavy rucksacks down, cursing the fact that all of us had probably over packed for the challenge in retrospect.

The obligatory summit shot was taken, some more fluids and a ham sandwich devoured, and then we set off again, this time descending over incredibly steep and rocky steps down towards Chapel-le-Dale with Ingleborough now firmly set in our sites. Oh how daunting Ingleborough looks from afar, and especially from this approach route. After around 16 or 17 miles already hiked the very last thing you want to see is a brooding dark peak, with clouds enveloping its summit and a near vertical rock wall to negotiate to attain it. But it’s the Three Peaks Challenge for a very good reason and not the Three Peaks stroll in the park and Ingleborough would make or break this merry band of hikers today.

In the foot of the valley we marched along Philpin Lane and past the BHF monitoring point set up for their charity walk which was also happening that day. We quizzed an Army Medic as to our progress and to the amazement of us all we were informed that we were doing incredibly well and were in fact ahead of time for our distance, being only some 20 minutes behind the hardcore hikers who do this in a respectable semi-pro time. The effect of this pep talk cannot be underestimated as all three of us visibly puffed our chests out and left with a new skip in our step.

Pumped up as we now were we galloped along towards Souther Scales Scars then suddenly Andy developed a leaky bladdder (and I do not mean his own)! The hydration sack had split in his rucksack and electrolyte infused water cascaded out from the base at the bottom of his back sack. Several enforced halts later and eventually the problem got solved, (down to a leaky washer), we then took the moment for a sobering look towards the looming Ingleborough and stealed ourselves for the start of the ascent from Humphrey Bottom.

At this point we did not know it but Andy was now about to hit his personal wall – as I indeed had earlier. Unfortunately for him it is possibly the worst place to have to confront your personal demons on the entire 25 mile route, as Ingleborough is unforgiving and vicious towards the unwary and downtrodden. We tackled the steep rocky ascent path slowly at first, having to take enforced breathers every 50 metres or so. This developed into longer breathers and less distance gained with each stop. Andy was visibly turning white with exhaustion and his brow began to sweat extensively. Graham helped rally him and ascended with him to give some moral support. For my sins I pressed on intently ahead as this ascent had been my only enjoyable part of the hike so far and at long last I had finally found my stride. I was actually enjoying this steep scramble having regained my mojo. Not wanting to miss my opportunity I selfishly pressed for the summit.

Ingleborough’s peak has a real mountain feel to it, the rocky moonscape lends an aura of real otherwordlyness to the surroundings and a splattering of cairns and a summit shelter to boot make this a confusing place to be. I covered all bases by touching all cairns and the trig point to be sure of adding the final peak to my collection on the day. The lads caught up with me and full service was resumed as Andy rallied for the final descent towards Horton. With the end in sight and the thought of an achievable and good time in prospect we bounded down the limestone scars across Sulber Nick and on towards the railway station in the village.

A quick check of the watches told us that we had nearly 25 minutes in our pockets to make a sub 10 hour time – not bad for some first timers – so we pressed for all we were worth. A last heavy enforced yomp along the village roads led us finally to within sight of our holy grail the Pen-y-ghent Cafe and the clocking out machine! Then at the appropriate moment we all linked arms and crossed the start/finish line together, clocking in with an admirable time of 9 hours 43 minutes exactly, and thus finally, very tired, and very sweaty but very happily became honorary members of ‘The Three Peaks of Yorkshire Club’!