The day started with a quick stop off at the Hawa Mahal or otherwise known as the “Palace of Winds”. Built in 1799 it has become an icon of the pink city of Jaipur. At five stories high but just one story deep it has a strange appearance being built for the sole reason to enable the ladies of the harem to watch unnoticed the crazy street scenes below on the busy and feverish Sireh Deori Bazaar.

After dicing with death to cross the busy and chaotic road in search of that perfect shot for the photo album back home and having to dismiss the usual motley collection of hawkers and vagabonds along the way it was then only a quick hop back onto the coach for the long trip ahead. We were headed deeper into Rajastahan and westwards towards the fringes of the Thar Desert. Our destination today was Kuchaman Fort and a stay at this truly unique location perched high up on a hilltop overlooking the desert below.

The next 6-7 hours were taken up with the usual road blocks and checkpoints at what seemed like mere 5 minute intervals. Gradually though the scenery was changing. It become gradually turning arid, a great deal hotter, and the flat plains were giving way to rocky outcrops and hills which eventually turned into foothills and then beyond them mountain ranges.

The further we sped into rural India the more apparent the cultural differences became. More and more camels were being used to tow carts, there were less and less cars and more and more donkeys being used for various modes of transport. The poverty and filth of the towns gave way to a different rural poverty, still as poor, but not as dirty. Women brushed the dusty pavements in front of their shacks, merely shifting the dust onto someone elses front, but non-the-less they were at least showing signs of pride and caring for their homesteads in whatever form it existed in, (something you do not often see in the towns).

Eventually the unmistakable outline of Kuchaman Fort perched high on the mightiest outcrop for miles around rolled into view. It was even more spectacular than in the photos and countless travel guides. The Fort has massive ramparts, some 32 bastions, 10 gates and various defences and is in every way a formidable fort. Now for the brief history lesson: Kuchaman City controlled the salt trade as far as back as 1,250 years ago. For this purpose the Gujjar Pratihara Dynasty had constructed part of the Kuchaman Fort during 760 A.D. They controlled the salt producing areas that start from Kuchaman and extend up to the salt lake of Sambhar.

We drove around the tiny twisting streets of the village to the the foot of the impressive hill. Pulling up at the end of the last surfaced road we disembarked from the coach and gazed upwards at our final destination. Our modes of transport for the day had not finished yet though, suddenly an open-topped jeep turned up and the first 4 people were ushered onto it leaving all their luggage on the street. In a cloud of exhaust dust they sped off around the corner and disappeared. The only way to gain access to the fort is by the old elephant path up the east face. This consisted of several switchbacks and many hair-raising drop-offs. The pot-holed cobbled pathway winds its way precariously up to the gateway of the fort at what seemed like a 45 degree incline in parts. We hung on for dear life when our turn arrived and trusted in the driving skills of a man we had never met before in flip-flops who was smoking heavily with one hand, and using a mobile phone in the other as he crunched gears casually accelerating at ever greater speed up the steep hillside.

The best was yet to come though as the road is so narrow that at one point the jeep has to engage reverse to continue the climb up as the turning circle is impossible to complete on the pathway and this is the only means left to continue the push onwards!

Finally, relieved, (and sweating profusely), we arrived at the gatehouse to the imposing fort. Room keys were to be divvied out and we waited patiently as everyone except ourselves seemed to acquire a key with ease. Eventually the guide came over to us and whispered that we had been given the highest and furthest away rooms in the fort. Not only that but these were the rooms that Sting and his wife Trudy had used when they had stayed here for her 50 birthday! Was this true or possibly some wierd wind-up I thought, but no, it was for real and we had been given the very same room Sting had stayed in during one of his zen like escapes. I had this wierd thought that both myself and Sting would have sat on the same toilet seat at some point in the same room, (don’t ask me why), contemplating life and its meaning etc, this image would just not leave my head.

With great expectation and some excitement we followed the narrow dark twisting passageways of the fort, up and up to the furthest reaches of the fort. Then there, right at the top, out on a limb at the highest point of the fort appeared the door to our room. Holding our breath we opened the heavy wooden doors and before our eyes we saw what all the fuss had been about.

Now I had to pinch myself that here I was a normal lad from Essex in an average job in London standing at the doorway to a room fresh from the pages of an adventure book, the kind of place Indiana Jones would stay at or some important Indian prince from days gone by would have cavorted in with his personal travelling harem no doubt. We took a deep intake of breath stepped inside the room and looked around some more, it was truly a room to amaze and astound the visual senses!

We flopped down on the bed and opened the tiny wooden shutters to the view of the desert way below and the ensuing sand storm that was now developing and beginning to engulf the mountains in the far distance. Candles were lit and we lay there letting the wind whistle through the tiny windows and blow refreshingly over our bodies cooling us down in the heat of the Indian afternoon.

This fort was not easy to get up to, or easy to get down from, and it was to be our bolt-hole on the fringes of the vast desert for the next couple of days. The only time we would be venturing down to the real world below would be to visit the village and take a scary tut-tut out to the salt-plains in the distance which shimmered hazily in the hot Indian sun. 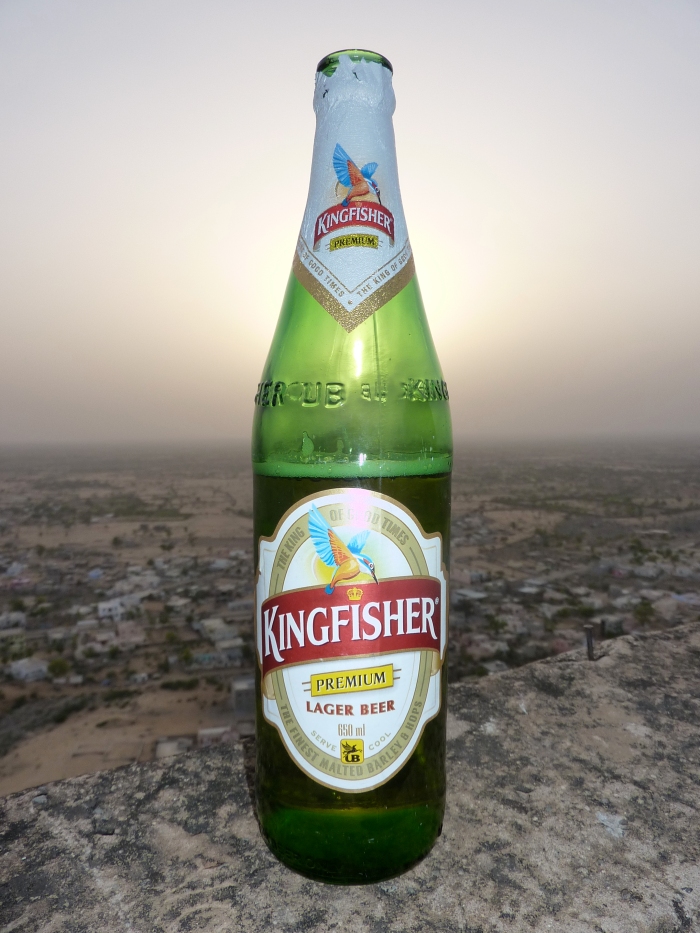 The fort had constant power cuts and so for much of the night we sat by candlelight listening only to the wind whistle through our room. Never had I felt so far away from the green, lush, cold and wet fields of England. We dined at 8pm on one of the many verandas, exchanged stories with fellow travellers and drank Kingfisher beer until late into the night.

We indulged in a small comedy sketch with the other diners each taking a tiny part to act out and to my eternal shame I felt for once exactly like an English Victorian traveller of the grand colonial days perched up high in my palatial dwelling eating and drinking merrily, laughing and cavorting while down below the locals were lucky to be eating anything at all. 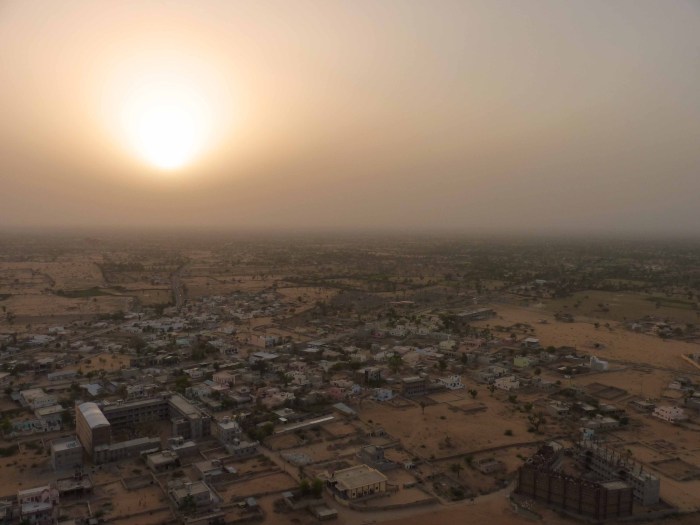 Travel is about experiences, lots of different experiences, some good, some bad, but always informative. I took a reality check, supped my last mouthful of beer, and made my excuses, then left hastily to make the long trek back to my room – have I mentioned before, once used by non other than Sting – high up in the nether regions of the spectacular fort. It was hard to be grounded, hard not to get totally carried away with it all in this far off land, but India as I was continually finding out is the land of contrasts and tomorrow we would see yet more!