After a first successful venture into the Welsh hills a couple of weeks ago it was once again time to hike on up into the Brecon Beacons and test some of my kit, and of course myself, in preparation for my imminent trip to Iceland to trek the Laugavagur Trail.

This time happily though I would not be alone, my microadventure buddy Andy would be joining me having driven up the day before from Cornwall ready to also test himself in the mountains and join me on my mad-cap trip.

Day 1 – LLanfrynach to Llyn Cwm Llwch
As ever the plan was simple, climb up Pen y Fan via the north ridge starting from the village of LLanfrynach then having triumphantly conquered the summit a small slap along the ridge would bag us the summit of Corn-Du before eventually descending to an isolated glacial lake called Llyn Cwm Llwch to spend the night wild camping by the water’s edge. Day two, should we have any energy left, would see us lug our 65 Litre rucksacks over the entire main Brecons Ridge bagging all the major peaks along the way before hiking across the peaty wild plateaux of Gwaun Cerrig Llwydion and back down descending into the green Talybont Hills and journey’s end at the White Lion Pub in Talybont-on-Usk. Simple!

When we arrived in Wales we found ourselves in the midst of a mini heat wave with temperatures reaching a barmy 69 degrees Fahrenheit in old money. Slapping on the suncream we set off from the village of LLanfrynach  towards the distant peaks of Cribyn and Pen y Fan.

Rambling through farmland and along green leafy lanes made a pleasant change from the usual mountain suffer-fest that I’ve been getting used to lately in preparation for Iceland. The change of scenery did not last long though unfortunately as soon enough we reached the forbidding bottom of the main ridge that would lead up to the highest point south of Birmingham….Pen y Fan.

As soon as we hit the ridge the temperatures started to plummet and the wind started to pick up. However, this I was more accustomed too having spent a wet and windy few days in The Lakes not too many weeks prior.

We stuttered on into the ever increasingly gusty wind, eager to reach the summit and dump our heavy rucksacks from off our backs. But Pen y Fan although not particularly gnarly to get up does have an unexpectedly long approach in to it and the full extent of what we had bitten off was beginning to register.

Having set off at around 1.30pm it was already looking like the proposed summit time of 6.30pm was looking quite optimistic as we constantly battled the unrelenting and buffeting wind with our already very fatigued legs and now increasingly burning pairs of lungs.

After several respite’s along the way we did eventually (as predicted) hit the summit. A quick handshake and a few minutes to take in the spectacular views then saw us press on along the summit ridge towards Corn Du.

Once on the top of Corn Du we could see the small glacial lake below of Llyn Cwm Llwch, our camp spot for the night. We eagerly yomped down towards this isolated lake more than ready to jettison our packs and pitch for the night in this incredibly tranquil setting.

With our spot picked out we erected our tent and bivvy then dropped our imported cans of lager into the icy cold waters of the Llyn to chill before setting about cooking dinner in the fading but also glorious late evening sunshine.

We sat on the shores of the Llyn for hours talking over the earlier days adventures and catching up on old times. A perfect evening spent in the hills.

Come the morning 7.00am saw us breaking camp and set off once more up the ridge toward Corn Du ready for another full day of hiking across the Brecon Beacons. 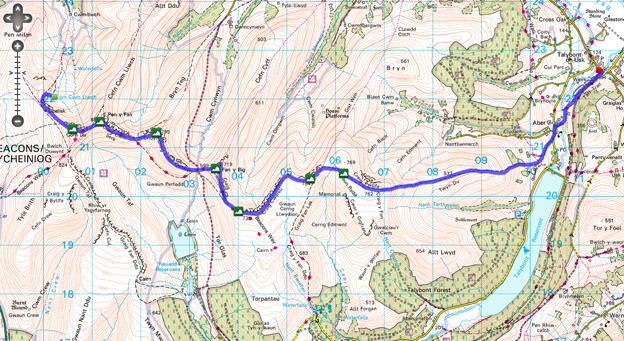 Day 2 – Llyn Cwm Llwch to Talybont-on-Usk
The mountain sky was a deep blue, the skylarks were singing and we had the trail all to ourselves as we cracked on, first retracing the previous days steps up to Pen y Fan, then onward to summit the mighty peak of Cribyn before finding ourselves some minutes later upon the top of the gloriously named Fan y Big.

The obligatory heroic photos were taken of each other teetering on the famous ‘Diving Board’ on Fan y Big before we pressed on towards Gwaun Cerrig Llwydion.

With our rucksacks now beginning to cut into our shoulder blades and having been on the go for a good 4 hours in the intensifying heat we halted for a while in one of the rocky shelters we found along the ridge at Craig Cwmoergwm.

Hunkering down out of the wind we reflected on what an epic hike this was turning into and from my point of view what good preparation it was for the type of trekking I will be doing in Iceland in less than three weeks time.

Refreshed and recharged we walked on towards Waun Rydd and one of the most wild and barren parts of the route passing over peat bogs and groughs along the way high up on a plateaux that makes for an interesting landscape to roam across. The navigationally challenged need not apply for this part of the route especially in bad or misty weather, thankfully today we were bathed in glorious sunshine.

With the famous Carn Pica now in sight we stopped a final time to take in the view from high up before our descent for real started down the Twyn Du, a route famous for breaking better men than us. A well known knee breaker for the TA and SAS recruits this long and arduous path down the flanks of the mountain feels more like a chore than a joy, unjustly so as the scenery is just as delightful as anywhere else found along the route.

Knees hurting and feet sore we painstakingly made our way down the well-worn path towards  the Talybont reservoir. A few more kilometres along some scenic and peaceful country lanes and an unexpected river crossing in some woods saw us eventually pick up the old tram-road back into Talybont-on-Usk.

With the end firmly in sight we congratulated ourselves on a good little hike and wild camp. The route had been spectacular and testing, as much about endurance and fitness as about navigating and camping skills. All had gone well and Andy had been introduced to the Brecon Beacons in a spectacular way. All we had to do now was walk the small remaining distance down over the Monmouthshire Canal and into the beer garden of the White Lion Pub in Talybont to complete the adventure.

It was now time for those beers and medals! 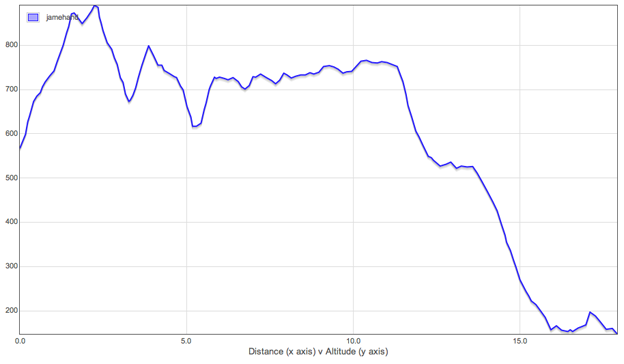 The Highs and the Lows of the trip. For more stats and details please visit my Social Hiking Map: http://www.shareyouradventure.com/map/13311/jamehand/Brecon-Beacons-Wild-Camp-Microadventure