‘What’s not to like?’, I asked myself early that morning while sitting in my tent having just decided on my hiking route for the day. It would be a classic glen circuit among the less visited and today very misty Pirnmill Mountains in the north of Arran. We would be visiting Loch na Davie source of the water for Arran Whisky (and the purest natural water source in Scotland). The route would also take me through one of the most remote areas on the island and across a couple of bleak and boggy gaps as well as up and down two magnificent Scottish glens. 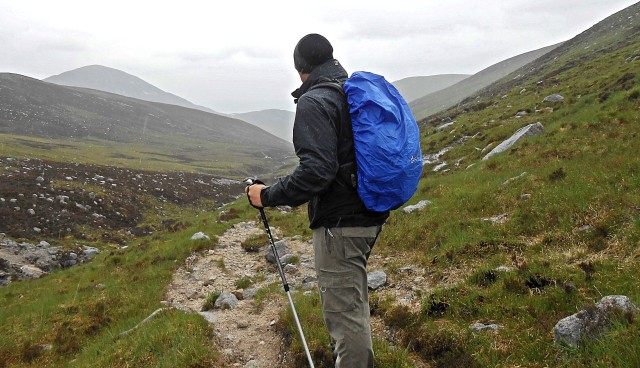 I was justly excited by the prospect and despite the dull and dreary conditions my spirits could not be dampened. I could start the hike directly from the porch of my tent avoiding any other forms of transport like the car or train all adding to the beauty of walking in this part of Scotland.

We left the confines of the campsite and headed toward the small humpback bridge which signals your arrival or exit of Lochranza and followed the public footpath sign beside the burn pointing in the direction of Gleann Easan Biorach.

The clear track ran quickly into the claustrophobic confines of the impressive glen made cold by the shadows of Torr Nead an Eoin a craggy outcrop of rocks guarding it’s northern entrance. The good path soon gave way to a steep, stony and narrow trail running close by the edges of an increasingly deep gash along the valley floor formed by the tumbling burn starting many miles upstream at our destination Loch na Davie!

The path picked it’s way along the side of the rough and rocky slope overlooking a series of small waterfalls, constantly being overlooked by the ever present and impressive Torr Nead an Eoin above.

Soon enough we encountered our first of many boggy moorland areas, soaked to the core by the days of constant rain that had battered this part of the world for weeks. The squelchy grassland began to slow us considerably and soon enough we were splattered with peaty mud and dirt, drenched to the knees regardless of the gaiters we wore.

Fording many tributaries in an attempt to keep on track we followed the burn upwards towards what we hoped was it’s source. The mists from the constant drizzle now started to hamper my navigation and soon I was forced to switch to my trusty GPS to track our progress as sighting natural features soon became near impossible. Still though I felt – as I had earlier in the day – ‘What’s not to like?’ this after all was the sort of adventure we had come to Arran for!

Soon we were climbing again this time up a boulder strewn heathery slope inching ever closer to our goal of Loch na Davie! At 360m we triumphantly trudged into the gap where the shallow waters of the Loch quickly came into view. The Loch is unusual in that it feeds two burns that run down into two glens, Gleann Essan Biorach (which we had just climbed up) and Gleann Diomhan (which we were about to descend into), the loch is also the source of allegedly the purest water anywhere in Scotland, and feeder of water to the Arran Distillery.

Na Davie had indeed made a worthy objective, but alas the rains grew heavier in strength and intensity and so instead of spending quality time on the edges of this tiny Loch we decided to press on over the gap and enter into the true wilderness beyond at the back of Beinn Bhreac in the remote centre of the Pirnmills. 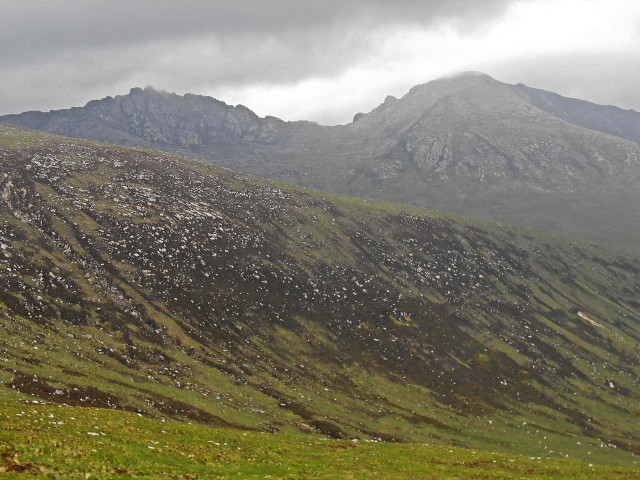 Clambering up the shoulder of the Beinn we attempted to keep on course by GPS alone as all natural features were now obscured by the sheets of heavy rain tippling down from the heavens around us. Climbing gradually to the gap at 400m our main objective now would be to spot the cairn which signalled the descent route sown into Gleann Dionhan. Any miscalculation here would inadvertently lead to greater difficulties later if the wrong path were to be inadvertently picked up. The path along the western side of the descending burn leads to many problems further on and is to be avoided at all costs.

Thankfully due to the wonders of satellite tracking we found ourselves spot on for the descent and started to move at pace in a vain attempt to outrun the scrawl of bad weather hounding us. The path was rugged in places as we followed the edge of the gorge toward the Gleann Dionhan National Nature Reserve. The reserve is home to some rare species of tree in particular the whitebeam and is ringed by a massive deer fence to keep both deer and sheep out of this protected and very fragile environment.

We continued at pace along the path through the reserve now descending rapidly into Glen Catacol, always following a firm and distinct path. This new path hugged the river mercilessly only occasionally deviating where necessary to climb over outcrops of banded rock. Soon enough though the ladder stile at the bottom of the valley could be seen which signalled the start of our escape route back onto terra firma in the form of the only road that circumnavigates Arran. 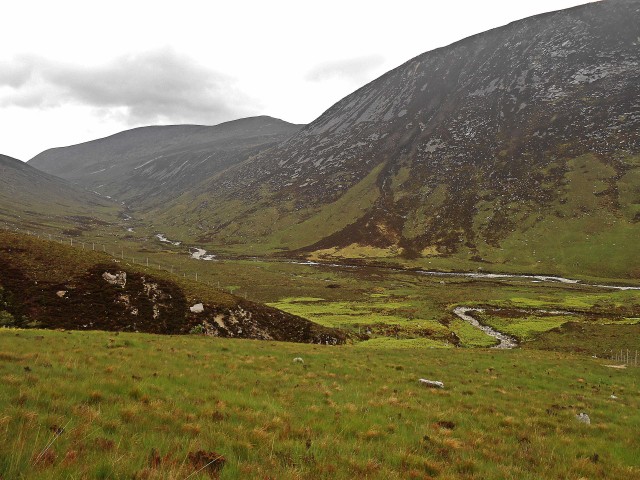 Pausing momentarily to catch our breath and pack away trekking poles in preparation for the tarmac section of the hike we turned to admire the beautiful glacial valley that we had just hiked out of, now that we were safely back down at sea-level and out of the rain.

The clouds still belched out their rain high up in the hills of Pirnmill behind us, but back down at sea-level we had inadvertently wondered into a balmy summer afternoon full of butterflies and the gentle sounds of crashing waves on pebble shores hidden behind bushes of pretty gorse.

Revived and reinvigorated we started out past the gorse bushes (known as Whin in these parts) following the road back around the tip of the island towards Lochranza. The village of Catacol soon came into view as we passed the cottages known as the Twelve Apostles and the watering hole of the Catacol Hotel. No time to pause today though as the 10 miles had taken their toll on us, not to mention a large slice of the days time, so for now our objective was to get back to Lochranza above all else.

We passed solitary cottages and damp wooded cliffs with the sea our constant companion to our left. The rain we had so far efficiently outrun at sea-level now paid us a final visit of the day soaking us to the core as we traipsed along the dreary tarmac.

The huts of the Claonaig Ferry finally edged into view from around the last of what had seemed like endless corners and no more welcome a sight could have been imagined, for these small nondescript buildings signalled one thing for us … the end!

We had made it back to Lochranza, we were covered in stinking peat and mud, had been soaked through incessantly, had seen high and remote places, crossed nature reserves, been very nearly lost, found the water source of the purest whisky in Scotland, hiked along two magnificent glens and seen the sea, all in a single days hike!

My thoughts all those hours ago of ‘What’s not to like?’ had been backed up in the strongest and most profound fashion by the unfolding events and sights of the day that we had just experienced. So although wet and covered in mud (not everyone’s idea of fun), I was for a fleeting moment at least a very happy hiker and with nearly a week still left on the Island my mind started to boggle with the endless possibilities of the other ‘What’s not to likes! 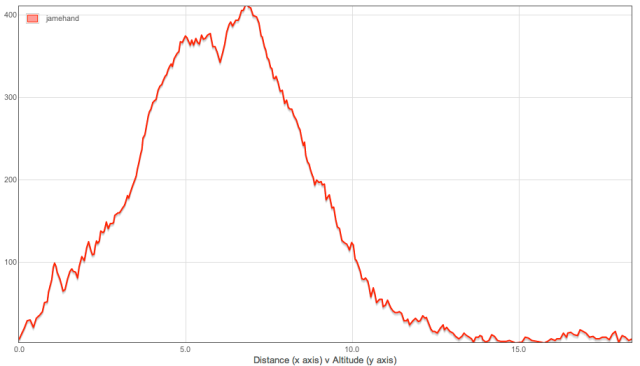 Find the Interactive Route Map from my trip to Arran here:
https://my.viewranger.com/track/details/MTA1OTUw
Next post about Arran coming soon – The Famous Saddle – Isle of Arran