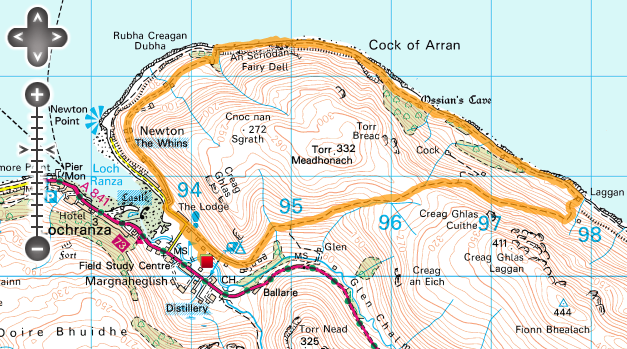 We had travelled to the Scottish Isle of Arran to experience something different to add to our inventory of UK hiking, climbing and camping adventures. We hoped for glorious mountains and unspoilt wilderness. Would we find it though?

The trip across the sea by ferry had offered tantalising views of the main mountain ranges to the north of the Island and upon docking we had driven directly north to the isolated and pretty fishing hamlet of Lochranza. Lochranza is a long straggly village that sits beside a charming sea loch. The romantic Lochranza Castle looks out over the sea from a narrow grassy point and I would wager that it would be hard to find anywhere more stereo-typically Scottish looking. We camped on the only campsite in the north of the Island on the edges of a golf-course where wild deer and stags are known to frequently graze and where a whisky distillery lies just across the road enticing you to sample their wares.

All was as idyllic as we had hoped for, so it was with great anticipation that we set out on the first hike of the trip, not up a mountain this time but along a wild, windswept and remote Scottish coastline around the northern tip of the island, hiking around the brilliantly named Cock of Arran!

We set out directly from the tent door (the best way to start a walk I always think) and headed across the greens of the immaculate golf course carefully negotiating around the grazing herd of deer. We continued on past some beautiful loch-side cottages until we reached the pebbly beach in Lochranza where we immediately turned right up a steep and stony track. We were headed for such imaginatively named places as ‘Fairy Dell’, ‘Ossian’s Cave’ and the ‘Cock of Arran’! Climbing up the steep track we came to the first of many old crofting cottages this one known as The Whins. This is home to the Arran stone-men a phenomena that has arisen around painted stones collected from around the shoreline of Arran which are then cleverly sculptured into cute little characters, all individual in size, shape, and appearance. We entered the craft cottage to nose around and found that it was a good half hour before we hit the trail again as the proprietor was more than anxious to talk to some exotic looking Londoners all about the big smoke and what it was that had brought us all the way to little Arran and his corner of the world. Upon escape (in the nicest way) we carried on along the stony path across a rugged slope of bracken and gorse scrub eventually following the track downhill toward another cottage known as The Knowe. Here we forded a small burn before continuing along a moorland path. Soon enough we started descending towards the sea. The path ran down towards a cottage and a small wooden hut at the foot of a wooded area called Fairy Dell. As the name would suggest, an idyllic little setting.

Now we turned right along the coastal path for the first time. The path was an easy mix of short green grass wedged between bracken and the rugged shoreline. The views both out to sea and inland towards the steep cliffs were amazing. It was easy to rick one’s neck as our heads darted first left and then right as if we were watching a tennis match at Wimbledon. Soon however our attention was drawn down to our foot placements as the gentle grassy path had given way to a less forgiving boulder strewn field!

The whole shoreline was a mass of large boulders made of coarse conglomerate rock. This area was known as Scriodan. Care was needed and care was duly taken. We wrestled with many a large boulder along the way zigzagging up and down, left and right along the shore. Little did I know it but I was actually walking in the famous footsteps of a certain James Hutton, he of the ‘Unconformity Rule’, known to geologists around the world. Evidently this very shoreline was where his theories were derived which provided evidence for his Plutonist theories of uniformitarianism and about the age of the Earth.

For our part it certainly felt like we had stepped back in time and were walking were few had trod. The steep imposing cliffs, the rough and boulder strewn shoreline, the mountains beyond the cliffs and all the varied flora and fauna around us, boy we had found what we had been looking for by coming to this island. It felt more like the lost world than Scotland and different to anywhere I had been to before. Best of all we had it all to ourselves, not a soul was about but us!

We passed by igneous dykes and scrambled over yet more boulders. Eventually we came to the only evidence of man’s interference in the area, some old ruined cottages beside the sea. Remnants of a once small industrial set-up where coal was mined and saltpans were once in use.

Soon over the horizon came the first glimpse of the white form of Laggan Cottage. The cottage was our end point along the shore and our turning point to head back inland and start the ascent up to a gap in the mountains where a cairn stands at 263m.

The steep path led up towards Torr Meadhonach which stands proud at 332m, we were only skirting the mountain but the views were still admirable as the sea started to stretch out below us and the mountainous interior started to loom large beyond. 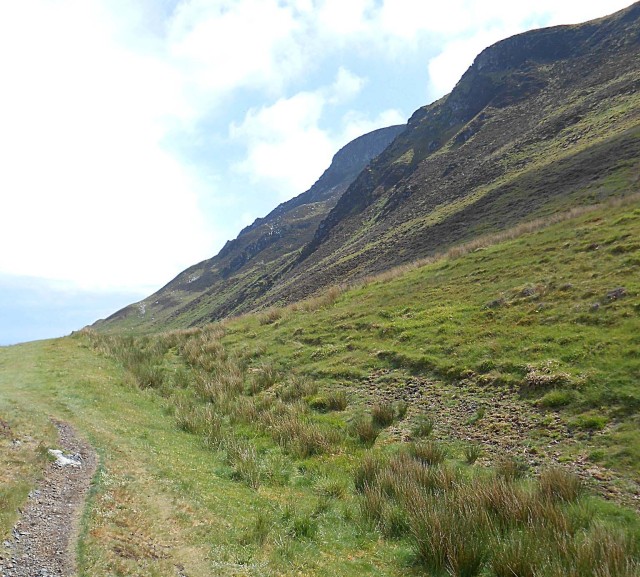 We passed by the ruins of Cock Farm famous for being the birthplace of the Macmillan family, honorary members of which include, Daniel Macmillan (founder of Macmillan Publishing) and great-great grandfather of former Prime Minister Harold Macmillan. The setting for the cottage was sublime but alas the building itself was in a ruinous state.

The path up was now flanked by boggy ground and we slogged uphill with the sun on our backs for the first time that day. But the views from the pass were worth the struggle. We could clearly see all the way down into Lochranza the distillery glimmering enticingly below and the white cottages reflecting the now strong sunlight back at us. In the other direction is was all blue sea stretching to the distant horizon and beyond, calm, flat and inviting.

After passing over the picturesque col the path ran down to a small footbridge across a tiny burn in a serine wooded ravine and then down some more until hitting a track which crossed leading eventually to Butt Lodge a former host to shooting parties in glamourous days gone by.

Eight miles had now passed since we had left the tent earlier that day and every foot of the walk had been interesting, different, beautiful and sometimes challenging. It all bode well for our week on Arran, our only regret being that the day could not last longer and that the walk could not have been further, but we had the whole week to look forward to hidden away on this lovely island so it was not too hard to console ourselves with a wee dram back in the Lochranza Hotel that evening after a very happy and fulfilling day out and about on this incredible Scottish island. 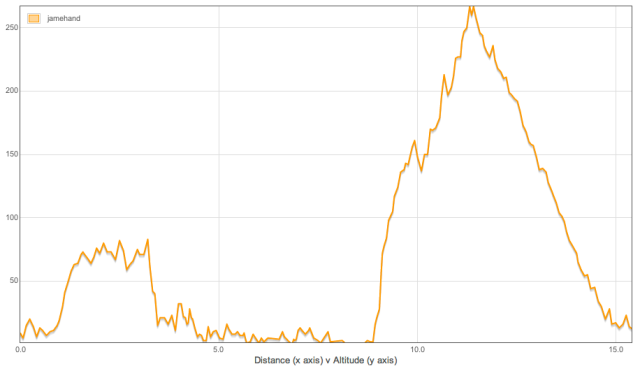 Find all the Interactive Route Maps from my trip to Arran here: http://www.shareyouradventure.com/map/os/jamehand/Isle-of-Arran-Routes See more photos from my Isle of Arran Adventure on flickr by clicking on this link: flickr Next post about Arran coming soon – A hike into the Glens of the Pirnmill Mountains

Sitting having a beer in my garden! It’s not all about high mountains and suffering 😎🍺 #relax #weekendvibes #beer #chill #essex
The team all roped up and pushing on for the summit at around 6,400 metres. #nepal #adventure #expedition #expeditionfit #mountains #mountaineering #travel #travelphotography #mera #merapeak #merapeakexpedition #himalayas #himalayan #neverstopexploring #neverquit
Pointing the way to Mera Peak! I’m dwarfed by the immense landscape of Nepal 🇳🇵- photos courtesy of @_paul_taylor #nepal #adventure #expedition #himalayas #himalayan #himalayasnepal #travelphotography #traveltheworld #travel #mera #merapeak #merapeakexpedition #neverstopexploring #neverstoptravelling #jaggedglobe
I’m now training for my first competitive Half Marathon in June. Back to slow training to build that aerobic base up again. Been training like this for the last 3 years and felt the benefits of it on the mountain last month at altitude in a big way, so I have become a strong advocate of this type of training. Run “Slow” to run fast!
Prayer Wheels - I always spin prayer wheels when I pass by them. According to the Tibetan Buddhist tradition based on texts regarding prayer wheels, spinning such a wheel will have much the same meritorious effect as orally reciting the prayers. I believe when climbing in the high mountains it’s good to ask for all the help you can get! 👍 #nepal #expedition #adventure #travel #himlayas #himalayan #travelphotography #budhism #tibetan #prayerwheel #prayerwheelspinning #neverstopexploring #neverstoptravelling #neverstoplearning #mera #merapeak #merapeakexpedition #jaggedglobe
Sherpas and porters the unsung heroes without whom none of us would have made it to the top (fact)! #nepal #expedition #adventure #himalayas #himalayan #mera #merapeakexpedition #merapeak #travel #travelphotography #jaggedglobe #mountains #sherpas #neverstopexploring